A stomach adult stem cell population can fulfill two distinct functions: either help with digestion under normal conditions or take the lead on injury response. Scientists at IMBA, Institute of Molecular Biotechnology of the Austrian Academy of Sciences, demonstrate that these functions are two sides of a coin. Upon injury, one “molecular switch” is enough to propel the stem cells from one state to the other. The findings, now published in Cell Stem Cell, could be instrumental in improving our understanding of gastric pathologies.

The interest of scientists in adult stem cells resides in their ability to self-renew indefinitely and differentiate into all cell types making up the organ where they reside. Increasing evidence suggests that these are not the only functions of adult stem cells. Some may also play a key role in the normal functioning of organs, a phenomenon called “homeostasis”, while still maintaining their ability to regenerate damaged tissue upon need. Hence, adult stem cells are more complex than we might have thought, and we might only be starting to scratch the surface of their functional diversity and versatility.

A specific adult stem cell population in the stomach body is called “chief cells”. These cells act as “reserve stem cells” under normal physiological conditions, meaning they do not divide but only secrete digestive enzymes. However, in the event of tissue damage, the cells suddenly switch to a rapidly proliferating state and regenerate the damaged tissue. “We knew that this behavior must depend on a switch, and we aimed to unveil the precise mechanism of this switch,” states IMBA Group Leader Bon-Kyoung Koo, the corresponding author of the study.

The researchers devised a robust action plan to answer their questions. Together with collaborators from Vanderbilt University Medical Center, Nashville, USA, and Pohang University of Science and Technology (POSTECH), Republic of Korea, they developed a mouse model to trace the effects of stomach tissue injury at a single-cell level. The team was thus able to characterize all the transcribed genes on a single-cell basis (an approach called “transcriptome analysis”) and trace the lineage of the cells in the regenerating mouse stomach tissue. “With this strategy, we identified one molecule, p57, as the potential molecular switch we had been looking for,” states Ji-Hyun Lee, lead author and Postdoctoral Fellow in the Koo lab at IMBA. “We confirmed that, upon injury, the level of p57 rapidly decreases in the chief cells and that this is followed by a peak of proliferation within the chief cell lineage,” she continues.

To test their hypothesis further and strengthen their findings, the team overexpressed p57 in stomach organoids. This allowed them to induce a long-term reserve stem cell state in the organoids and an increased level of enzyme secretion. In other words, the high p57 levels in the organoids made the reserve stem cells behave more like mature, secretory chief cells, that do not proliferate. “Organoids are usually highly proliferative because of the growth factor cocktail that they need in culture. However, once we introduced p57, the organoids suddenly stopped growing,” explains Lee. “In a second step, we reduced the expression of p57, and to our delight, the organoids started proliferating again,” she carries on before summing up: “This means that the cells did not lose their stemness due to p57. They merely went into a reserve state, exactly mimicking our in vivo observations.”

The molecule p57 belongs to a larger family of proteins, the so-called CDK inhibitors, that inhibit the cell cycle and proliferation. Drugs with this function have been developed to treat some cancers. Hence, the team led by Koo and Lee tested the effect of other molecules of this family on stomach organoids to check if their findings are truly specific to p57. Unlike p57, the other molecules did not induce a reversible reserve stem cell state in the organoids but simply caused them to die. “Our findings show that p57 is a gatekeeper that imposes the reserve stem cell state of the stomach chief cells in homeostasis,” sums up Koo, confirming that p57 is indeed the molecular switch they had been looking for.

The findings could have an important impact on understanding gastric pathologies. Lee mentions one such known condition, Spasmolytic Polypeptide-Expressing Metaplasia (SPEM), a chronic condition known to be pre-malignant, or that could lead up to cancer. “Although SPEM is a chronic condition and our experimental setup only allows us to test the effects of acute injury, we now believe that SPEM is derived from the stomach chief cells. Hence, understanding the activation of these cells ultimately helps us understand the underlying molecular mechanisms of SPEM,” concludes Lee.

IMBA - Institute of Molecular Biotechnology - is one of the leading biomedical research institutes in Europe focusing on cutting-edge stem cell technologies, functional genomics, and RNA biology. IMBA is located at the Vienna BioCenter, the vibrant cluster of universities, research institutes, and biotech companies in Austria. IMBA is a subsidiary of the Austrian Academy of Sciences, the leading national sponsor of non-university academic research. The stem cell and organoid research at IMBA are being funded by the Austrian Federal Ministry of Science and the City of Vienna. 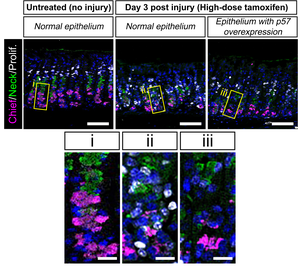 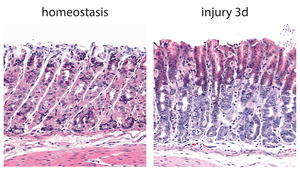