Maehary bonapartei represents a small reptile that is considered to be the most basal of the evolutionary lineage that gave rise to pterosaurs. The study also demonstrates that Faxinalipterus minimus is not a winged reptile, contrary to what was previously supposed.

Researchers from the National Museum/UFRJ, the Federal University of Santa Maria, the Catalan Institute of Paleontology, the Regional University of Cariri, the Federal University of Pampa, the Federal University of Rio Grande do Sul and COPPE/UFRJ presented a review of a small reptile named Faxinalipterus minimus, from Triassic rocks (about 225 million years ago) in Rio Grande do Sul. Faxinalipterus was described more than a decade ago (2010), being assigned to the Pterosauria, a group which includes the first vertebrates to develop active flight. The original fossil of Faxinalipterus was composed by bones from the postcranial sleleton and a part of the skull (an upper jaw with several teeth), found separately in two field expeditions, carried out in 2002 and 2005, at the Linha São Luiz fossil site, located in the municipality of Faxinal do Soturno. Thus, it was not possible to say with certainty whether all parts belonged to the same type of animal and species. Despite this, it was assumed at the time that all the bones belonged to a single species, named Faxinalipterus minimus.

The new study of Faxinalipterus established that there were two distinct species, with the isolated jaw representing another animal. This was possible based on the comparison with a new fossil recently found at the same site (Linha São Luiz). The new material is composed of an incomplete skull, whose maxilla exhibits the same features of the maxilla attributed to Faxinalipterus. In addition, there are parts of the mandible, scapula and some vertebrae. The maxilla of Faxinalipterus can therefore be incorporated into the description of the new fossil, that was named Maehary bonapartei. The study was featured in the journal PeerJ.

“There was always a great doubt whether the two specimens attributed to Faxinalipterus represented the same species, and whether this was a flying reptile,” commented Alexander Kellner, a specialist in pterosaurs who currently directs the Museu Nacional/UFRJ. Having examined the specimen shortly after publication in 2010, he saw that several bones could be misidentified and the lack of diagnostic features of pterosaurs, including the absence of specific features on the humerus (forelimb bone), such as a large and projected deltopectoral crest, which is typical of pterosaurs. Borja Holgado, also a specialist in pterosaurs from the Catalan Institute of Paleontology and currently a researcher at the Regional University of Cariri (Ceará), analyzed the material and agreed with the initial conclusions. "It was clear to me that this is a primitive reptile that did not belong to pterosaurs, as it did not present any unequivocal features of this lineage" explained Holgado and pointed out: "But the present knowledge of the faunas at the end of the Triassic indicates that the disparity of animals at that time was so great that animals that might resemble pterosaurs at first glance, but really they are not flying reptiles. This is what happened to Faxinalipterus and Maehary."

“The material on which Faxinalipterus is based is very fragile and very incomplete. In addition, parts of the bones were covered by rock matrix, which required a more detailed preparation” commented Cesar Schultz, from UFRGS and one of the authors of the 2010 work and of the new research that has just been published.

The preparation of the original material required a lot of experience and was carried out at the National Museum. “Fortunately, we were able to photograph the entire specimen in detail”, said Orlando Grillo, who took care to reproduce in the form of drawings each anatomical detail of the bones of Faxinalipterus.

It was with the help of a CT scanner that the enigma was revealed. “Computed tomography has been an increasingly used tool in paleontological studies” highlights Ricardo Lopes from COPPE/UFRJ. “It is a non-destructive analysis that allows the visualization of anatomical details still covered by the sedimentary rock where the fossil is preserved” adds Olga Araújo, also from COPPE.

“In the original work from 2010, we found that the teeth present in the maxilla of Faxinalipterus were very closely spaced, which is a characteristic of early Triassic pterosaurs. However, tomography of the maxilla showed that the teeth were not as separated as initially thought, since many teeth had been lost during the fossilization process. As a result, the dentition pattern and the close-spacing between the alveoli (cavities where the teeth are inserted) were not consistent with pterosaurs,” highlights Marina Soares.

After these studies, there was still a doubt about who, after all, Faxinalipterus was. The solution came from the finding of a new specimen that had been collected in the same region where the specimens of Faxinalipterus came from. “Systematic collections have been carried out by CAPPA (Support Center for Paleontological Research of the Fourth Colony), from UFSM, revealing a series of new fossil species for the Triassic of Rio Grande do Sul” commented Flávio Pretto. At the Linha de São Luiz fossil site, in the municipality of Faxinal do Soturno, several fossils have already been found, such as close relatives of mammals, dinosaurs and other reptiles. The region where the excavations were carried out is located in the territory of the Quatro Colônia - that is seeking to become an UNESCO Geopark.

“When we had access to the study that was being developed by the National Museum team, it became clear that the maxilla, until then referred to Faxinalipterus, was very similar to the material we were studying,” added Leonardo Kerber. “They were definitely not examples of a pterosaur,” reinforced Felipe Pinheiro, from UNIPAMPA, a researcher who is also an expert in winged reptiles.

Using an anatomical database, the team established that Faxinalipterus would be closely related to lagerpetids, a branch considered to be a sister group to Pterosauria in more recent studies. Together, lagerpetids and pterosaurs form a broader group called Pterosauromorpha. In this context, the new species Maehary bonapartei was positioned as the most primitive member within Pterosauromorpha. "That is, Faxinalipterus and Maehary are not pterosaurs, but are related to them. Especially Maehary is configured as a key element in the elucidation of how the anatomical characteristics evolved along the lineage of pterosauromorphs to the pterosaurs themselves, fully adapted to the flight", points out Rodrigo Müller. "These species, with an estimated length of 30 cm for Faxinalipterus and 40 cm for Maehary, demonstrate the importance of continuing to collect fossils in this region."

The genus name of the new species comes from Ma'ehary, an expression of the original Guarani-Kaiowa people, which means "who looks at the sky" in allusion to its position in the evolutionary line of reptiles, being the most primitive of the Pterosauromorpha, group which includes the fascinating pterosaurs. The specific name is a fitting tribute to the main researcher of fossil vertebrates in Argentina, José Fernando Bonaparte (1928–2020), who died recently, and who worked actively together with Brazilian paleontologists in outcrops of Rio Grande do Sul, in the collection and description of many extinct vertebrates that lived during the Triassic period, including Faxinalipterus.

Now researchers are looking for new findings that help to understand how the first forms of this fascinating group of pterosaurs came to be.

PeerJ: Reassessment of Faxinalipterus minimus, a purported Triassic pterosaur from southern Brazil with the description of a new taxon

Fig. 4 - Right humerus of Faxinalipterus (UFRGS-PV-0927-T) which is quite different from the humerus of pterosaurs. Note the little projection of the deltopectoral crest (dpc), which in pterosaurs is much more developed. This is an important feature for the flight. Image of the published article.

Fig. 5 - Left maxilla (UFRGS-PV-0769-T) originally attributed to Faxinalipterus minimus, which was reclassified as belonging to Maehary bonapartei. A: side view photo; B: lateral view tomography; C: tomography of the internal view and D: tomography of the occlusal view.

Fig. 7 - Right side of the skull and mandible (incomplete) and other bones of Maehary bonapartei (CAPPA/UFSM 0300). Photo: Rodrigo Temp Müller.

Fig. 8 – Artistic reconstruction of the landscape of the Fourth Colony 225 million years ago. On the branches of a primitive araucaria, little Maehary hunts an insect. Art by Márcio L. Castro, photo: Flavio Pretto.

All media is CC BY 4.0. Photo/video credits are included in the filename.

LINK TO THE PUBLISHED VERSION OF THIS ARTICLE: https://peerj.com/articles/13276/ The link will ONLY work after the embargo lifts. Your readers will be able to freely access this article via this URL.

PeerJ is an Open Access publisher of seven peer-reviewed journals. PeerJ’s mission is to give researchers the publishing tools and services they want with a unique and exciting experience. All works published by PeerJ are Open Access and published using a Creative Commons license (CC-BY 4.0). PeerJ is based in San Diego, CA and the UK and can be accessed at peerj.com.

In 2022 PeerJ is celebrating its first decade of publishing and innovation.

PeerJ is the peer-reviewed journal for Biology, Medicine and Environmental Sciences. PeerJ has an Editorial Board of over 2,000 respected academics. PeerJ Media Resources (including logos) can be found at: peerj.com/about/press

Note: If you would like to join the PeerJ Press Release list, please email your details to: press@peerj.com

Reassessment of Faxinalipterus minimus, a purported Triassic pterosaur from southern Brazil with the description of a new taxon

A new 225-million-year-old reptile from Brazil 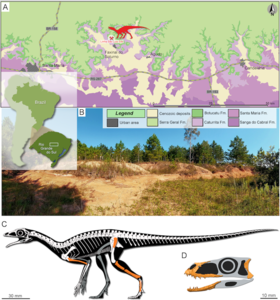 Location where the fossils were found