PITTSBURGH, May 4, 2022 – Neurobiologists at the University of Pittsburgh School of Medicine give new meaning to the term “motor mouth” in a study published today in the Proceedings of the National Academy of Sciences. By carefully mapping neural networks in marmoset and macaque monkeys, they determined that multiple areas in the brain’s frontal lobe control the muscles of vocalization and could provide a foundation for complex speech.

The findings – which could lead to a better understanding of speech disorders – refute a long-existing presumption that only the primary motor cortex, nicknamed M1, directly influences the larynx or voice box, said principal investigator Peter L. Strick, Ph.D., Thomas Detre Professor and chair of neurobiology at Pitt. Instead, several cortical regions send signals to laryngeal muscles to create greater vocal finesse in some nonhuman primates.

“This kind of parallel processing in our neural wiring might explain why humans are capable of highly sophisticated language that allows us to share information, express and perceive emotion, and tell memorable stories,” said Strick, who also is scientific director of Pitt’s Brain Institute. “Our remarkable speech skills are due to more evolved brains, not better muscles.”

Led by Christina M. Cerkevich, Ph.D., research assistant professor of neurobiology, the investigators compared in marmosets and macaques neural networks that are the origin of descending command signals to control monkey vocalizations.

“We selected these two monkey species because of the striking differences in their vocal behavior,” Cerkevich explained. “Marmosets readily vocalize in ways that are akin to humans by taking turns to speak and altering the volume, timing and pitch of their calls to each other. Macaques, on the other hand, make mostly simple, spontaneous calls.”

The researchers injected a transneuronal tracer made from rabies virus into the cricothyroid muscle of the monkeys’ larynxes. The tracer infects nerve cells and has the unique property of moving from one neuron to another only at synapses, which are the special sites where neurons interact with each other. This makes it possible to track neuronal circuits from the muscle back to the areas of the cerebral cortex that control it.

In addition to M1, both kinds of monkeys had multiple premotor areas in the frontal lobe that send descending command signals to the cricothyroid muscle. But two of the premotor areas provided a substantially larger source of descending output in marmosets, leading the researchers to propose that the enhanced vocal motor skills of marmosets are due, in part, to the expansion of neural signaling from these premotor areas.

“This result challenges the long-held view that improvements in motor skills of vocalization are due largely to changes in the output from M1, the primary motor cortex,” Strick said. “It appears there is no single control center, but rather parallel processing sites that enable complex vocalization and, ultimately, speech.”

Next steps include studying other nodes in the vocal motor network and to understand how alterations in this network contribute to or result in vocal disorders, including stuttering and speech apraxia.

As one of the nation’s leading academic centers for biomedical research, the University of Pittsburgh School of Medicine integrates advanced technology with basic science across a broad range of disciplines in a continuous quest to harness the power of new knowledge and improve the human condition. Driven mainly by the School of Medicine and its affiliates, Pitt has ranked among the top recipients of funding from the National Institutes of Health since 1998. In rankings released by the National Science Foundation, Pitt is in the upper echelon of all American universities in total federal science and engineering research and development support. 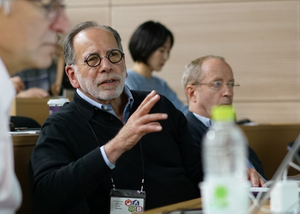