A research team was able to generate polarized X-rays with unprecedented purity at the European XFEL in Hamburg. The experiments involved scientists from the Helmholtz Institute Jena, a branch of GSI, Friedrich Schiller University Jena and the Helmholtz Center Dresden-Rossendorf. The method is supposed to be used in the coming years to show that even vacuum behaves like a material under certain circumstances — a prediction from quantum electrodynamics.

Additional polarizers, such as those being developed at the Helmholtz Institute in Jena, have the purpose of further improving polarization purity, but for a long time the limit of a few 10-10, i.e., out of ten billion photons, only a handful have the unwanted polarization, could not be pushed any further. In 2018, Kai Schulze, first author of the paper now published in Physical Review Research, found that the divergence of synchrotron radiation is the reason for this limit. "So to get a further improvement in purity, we needed a source with better divergence," says the physicist, who leads work on vacuum birefringence at HI Jena and is jointly responsible for related DFG research projects at the University of Jena. "The commissioning of the European X-ray laser, European XFEL, in Schenefeld near Hamburg set the course for this."

Together with scientists from the Friedrich Schiller University of Jena and the Helmholtz Center Dresden-Rossendorf, Schulze and his team developed an experiment setup at the European XFEL that set a new purity record of 8×10-11 thanks to special polarizer crystals, a very precise alignment and a stable setup. This new purity record has already enabled a number of experiments on quantum optics in the X-ray range and on charge distribution in solids. However, special interest is devoted to the detection of the so-called vacuum birefringence.

The interaction of light with light was described as early as 1936 by Werner Heisenberg and Hans Euler, but has not yet been directly observed on Earth. "Vacuum birefringence is currently the most promising effect to directly detect light-light interaction," Schulze explains. "In this process, the polarization of a sample beam changes when it collides in vacuum with a very intense second light beam. The vacuum thus acts like a birefringent crystal, which also affects the polarization; hence the name. The effect is extremely small, but grows with decreasing wavelength of the sample beam. Precise polarizers in the X-ray range therefore provide a good tool to detect the effect."

The High Energy Density instrument at the European XFEL will provide the ideal conditions for such an experiment in the future, Schulze further explains. And the research team now has a setup with which the smallest polarization changes can be measured. The detection of vacuum birefringence would not only further underpin the foundations of quantum electrodynamics, but, if deviations from theoretical expectations emerge, also provide clues to previously unknown elementary particles (such as axions, or millicharged particles). "We hope to be able to launch the first experiments in the next few years."

Detection of the phenomenon would also be interesting for future experiments at the FAIR particle accelerator center. "If we succeed in measuring vacuum birefringence, this will help interpret the measurement data from FAIR. Among other things, vacuum polarization will play a role there, which is closely linked to vacuum birefringence," Schulze said. 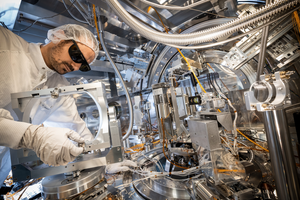