A research led by Hong Kong University of Science and Technology (HKUST) has revealed a novel mechanism that regulates secretion of sonic hedgehog (Shh), a key signaling molecular that plays an important role in cancer progression, in mammals, opening the door to novel therapeutic strategies for cancer induced by the hedgehog signaling pathway.

The hedgehog (Hh) signaling pathway is instrumental in regulating embryonic patterning and facilitating the development of the central nervous system and organs of the human body.  Such a pathway transmitting information between cells is initiated by the Hh ligands, which are first secreted from the producing cells and then bound with specific receptors on target cells to induce Hh signaling (Fig. 1).

Hh signaling is a major target for cancer therapy because this pathway, when hijacked by cancer cells, can promote cancer progression.  However, all of the current Hh antagonists function to inhibit the activity of major factors mediating Hh signaling in target cells, but do not effectively block cancer progression that is promoted by the secreted Hh ligands.

Now, an international research team led by Prof. GUO Yusong, Associate Professor of Division of Life Science at HKUST, has revealed the mechanism governing the secretion of sonic hedgehog, a key member of Hh ligands in mammals, from the producing cells, offering new insights into inhibiting its secretion and shutting down Hh signaling pathway when it is hijacked by cancer cells, thereby hindering cancer progression.

In the conventional secretory transport pathway, newly synthesized secretory proteins are firstly translocated into the endoplasmic reticulum (ER), where they are folded and modified.  These proteins are then packaged into transport vesicles to be delivered to the Golgi apparatus to receive further modifications.  Subsequently, they are enriched in transport vesicles at the trans Golgi network (TGN) and delivered to the plasma membrane to be secreted to the extracellular environment (Fig. 1).

To study the secretion of Shh, Prof. Guo’s team used a Retention Using Selective Hooks (RUSH) transport assay to analyze the secretion of sonic hedgehog in a synchronized manner (Video 1).  Using this approach and other classical cellular and molecular biology approaches, the researchers elucidated that the secretion of Shh is regulated by the following steps:

The research findings not only reveal a novel SURF4-to-proteoglycan relay mechanism that regulates the secretion of Shh, but also indicate that blocking the SURF4-Shh interaction is an effective way to inhibit Shh secretion.

The results were recently published in Proceedings of the National Academy of Sciences (PNAS), with an US provisional patent already submitted by the research team for consideration.

Prof. Guo is the corresponding author of the paper, while Prof. Elizabeth A. MILLER from MRC Laboratory of Molecular Biology, Prof. YAO Shuhuai and Prof. HUANG Jinqing from HKUST, Prof. ZHANG Liang from City University of Hong Kong, and Prof. HU Junjie from Chinese Academy of Sciences also participated in this study. Dr. TANG Xiao from HKUST is the first author of this study. 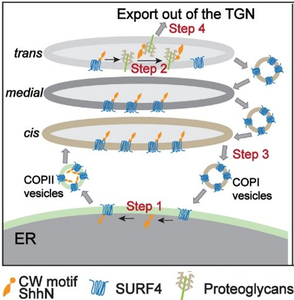 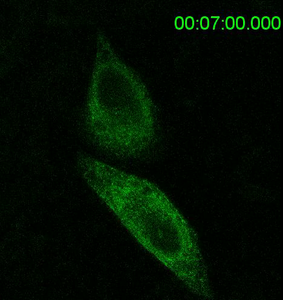