“These dynamical behaviors of magnetic skyrmions are very feasible for the design of magnetic skyrmion-based spintronic devices such as logic gates, transistors, complementary racetrack memory, etc.”, Prof. Hongxin Yang says. With the increase of chiral multiferroic materials and the emergence of DMI chirality switching mechanism, the magnetic skyrmions-based logic gates will hopefully be simplified to one single nanotrack and achieve the complete reconstruction of Boolean logic gates.

Dr. Dongxing Yu, Prof. Hongxin Yang, Prof. Mairbek Chshiev, together with Nobel Laureate physicist Prof. Albert Fert, explored the connection between the reconstruction of logic gates and the dynamics of magnetic skyrmions. By locally controlling the DMI chirality, the team reconstructed the non-volatile energy barriers to switch various magnetic skyrmion dynamic phenomena, allowing the implementation and reconfiguration of logic functions including AND, OR, NOT, NAND, NOR, XOR and XNOR.

“Any two of these functions or operations can be easily transformed from one to another by switching the chirality of the DMI using voltage control in one single nanotrack, and skyrmions can be recycled after each operation.”, Dongxing Yu says. Based on the pinning and depinning function of non-volatile energy barriers, the team also simulated the “on” and “off” states of a skyrmion transistor and skyrmion bit reset. “This will be a beneficial exploration to the construction of spintronic devices by manipulating topologically non-trivial magnetic structures such as magnetic skyrmions.”, Hongxin Yang says.

Compared to other reconfigurable logic gates requiring a combination of multiple strips or a cascade of simple functions to perform two or more logic operations, this study realized the implementation and reconfiguration of 7 kinds of logic functions into one single nanotrack through micromagnetic simulations, thereby further simplifying the design of the spin-based logic devices and promoting the potential application of magnetic skyrmions-based logic gates in the field of information processing. 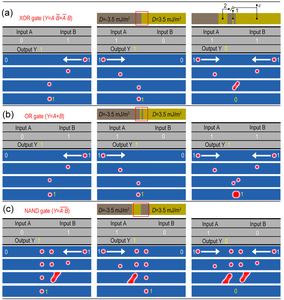