Biologist Xinnian Dong says her “best Christmas gift ever” arrived in the form of a phone call. The call was from her longtime friend and collaborator at Duke University, Pei Zhou, who rang with long-awaited news: they had finally solved the structure of the plant protein NPR1.

Dong, a Howard Hughes Medical Institute Investigator, discovered NPR1 ­twenty-five years ago. The protein, with a name inspired by Dong’s love of National Public Radio, plays a key role in protecting flowering plants against a broad spectrum of pathogens. Today, NPR1 is widely recognized as a master regulator that controls more than 2,000 genes involved in plant immunity.

Despite its outsized role in plant defense, NPR1’s structure has remained elusive ­– much to the consternation of researchers in the field. Without detailed structure data, scientists have struggled to understand how the protein governs plant protection, Zhou says. “What’s really crucial and missing is an explanation of how NPR1 works on a molecular level.”

In new work that unveils how NPR1 looks and acts, Zhou and Dong’s teams bridge that gap – a find that could change the face of plant breeding. The two groups report the structure of NPR1 from the common lab plant Arabidopsis thaliana on May 11, 2022, in the journal Nature.

For Dong, the paper marks the end of a decades-long quest. “When I first saw the structure of NPR1, it took my breath away,” she says. “It looked like a gliding bird, just beautiful.”

Plants that are fighting fit

For as long as humans have cultivated crops, they have had to fight off the numerous pests and pathogens that stymie plant growth. The water mold Phytophthora infestans, for instance, is one of the most notorious baddies ­– responsible for the Irish Potato Famine that resulted in a million deaths and two million refugees. “It’s a huge struggle that has shaped our world,” says Dong.

Today, pathogens continue to plague bananas, avocados, and other popular crops. But tackling the problem with traditional approaches can be problematic. Chemical pesticides, for example, are often toxic to the environment. That’s one reason plant breeders are now looking to genetic solutions, like engineering plant cells to produce high levels of NPR1. The approach has proven successful in the lab and in limited field trials, but with one catch: as immunity increases, growth declines.

The newfound knowledge of NPR1’s structure and behavior could help researchers skirt this problem and engineer better crops, says Jonathan Jones, a plant biologist at the Sainsbury Laboratory in Norwich, UK, who was not involved in the research. “Understanding how the protein works and interacts with other molecules has considerable potential to be very powerful for enhancing disease resistance in plants,” he says.

A bird with unfurled wings

Zhou, Dong, and their colleagues solved NPR1’s structure using x-ray crystallography and the imaging technique cryo-electron microscopy (cryo-EM). Many labs have tried and failed over the years, says Jijie Chai, a structural biologist at the University of Cologne, who was not involved with the work. “NPR1 is notoriously difficult to purify for imaging,” he says.

The team’s success stemmed from using the techniques complementarily. Cryo-EM gave the researchers a preliminary structure of NPR1, which offered crucial insight into how to prepare the protein for successful crystallography. The result: high-resolution images of NPR1 and its key functional regions.

While previous studies offered glimpses into parts of NPR1’s structure, none have been “as comprehensive as reported in this new paper,” Jones says. The new images reveal that two NPR1 proteins come together, forming a structure that resembles a bird with unfurled wings. At the wing tips, NPR1 binds to molecules in the cell’s nucleus to turn on plant immune genes, Dong’s team discovered. “Four years of experimentation was well worth the wait,” she says.

Now, her team wants to find out how NPR1 folds into a new shape when an infection kicks the protein into action. “This study not only addressed many long-standing questions, but also points to new research directions,” Dong says. “It’s an exciting time.” 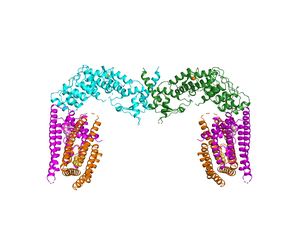