Early animals formed complex ecological communities more than 550 million years ago, setting the evolutionary stage for the Cambrian explosion, according to a study by Rebecca Eden, Emily Mitchell, and colleagues at the University of Cambridge, UK, publishing May 17th in the open-access journal PLOS Biology.

The first animals evolved towards the end of the Ediacaran period, around 580 million years ago. However, the fossil record shows that after an initial boom, diversity declined in the run-up to the dramatic burgeoning of biodiversity in the so-called “Cambrian explosion” nearly 40 million years later. Scientists have suggested this drop in diversity is evidence of a mass extinction event roughly 550 million years ago – possibly caused by an environmental catastrophe – but previous research has not investigated the structure of these ancient ecological communities.

To evaluate the evidence for an Ediacaran mass extinction, researchers analyzed the metacommunity structure of three fossil assemblages that span the last 32 million years of this geological period (between 575 to 543 million years ago). They used published paleoenvironmental data, such as ocean depth and rock characteristics, to look for metacommunity structure indicative of environmental specialization and interactions between species. The analysis revealed increasingly complex community structure in the later fossil assemblages, suggesting that species were becoming more specialized and engaging in more inter-species interactions towards the end of the Ediacaran era, a trend often seen during ecological succession.

The results point to competitive exclusion, rather than mass extinction, as the cause of the diversity drop in the late Ediacaran period, the authors say. The analysis indicates that the features of ecological and evolutionary dynamics commonly associated with the Cambrian explosion — such as specialization and niche contraction — were established by the first animal communities in the late Ediacaran.

Mitchell adds, “We found that the factors behind that explosion, namely community complexity and niche adaptation, actually started during the Ediacaran, much earlier than previously thought. The Ediacaran was the fuse that lit the Cambrian explosion.”

In your coverage, please use this URL to provide access to the freely available paper in PLOS Biology:   http://journals.plos.org/plosbiology/article?id=10.1371/journal.pbio.3001289

Funding: This work was funded by a Natural Environment Research Council Independent Research Fellowship NE/S014756/1 to EGM. The funders had no role in study design, data collection and analysis, decision to publish, or preparation of the manuscript. 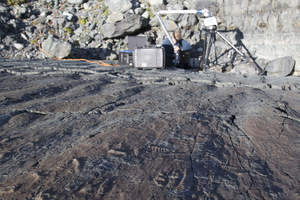