Humanity is “at a crossroads” when it comes to managing drought and accelerating mitigation must be done “urgently, using every tool we can,” says a new report from the United Nations Convention to Combat Desertification (UNCCD).

“​​Drought In Numbers, 2022,” released today to mark Drought Day at UNCCD’s 15th Conference of Parties (COP15, 9-20 May in Abidjan, Côte d’Ivoire) – calls for making a full global commitment to drought preparedness and resilience in all global regions a top priority.

The report, an authoritative compendium of drought-related information and data, helps inform negotiations of one of several decisions by UNCCD’s 196 member states, to be issued 20 May at the conclusion of COP15.

“The facts and figures of this publication all point in the same direction: an upward trajectory in the duration of droughts and the severity of impacts, not only affecting human societies but also the ecological systems upon which the survival of all life depends, including that of our own species.” says Ibrahim Thiaw, Executive Secretary of the UNCCD.

The report creates a compelling call to action. For example:

Unless action is stepped up:

“We are at a crossroads,” says Mr. Thiaw.  “We need to steer toward the solutions rather than continuing with destructive actions, believing that marginal change can heal systemic failure.”

“One of the best, most comprehensive solutions is land restoration, which addresses many of the underlying factors of degraded water cycles and the loss of soil fertility. We must build and rebuild our landscapes better, mimicking nature wherever possible and creating functional ecological systems.”

Beyond restoration, he adds, is the need for a paradigm shift from ‘reactive’ and ‘crisis-based’ approaches to ‘proactive’ and ‘risk-based’ drought management approaches involving coordination, communication and cooperation, driven by sufficient finance and political will.

The new UNCCD report notes that 128 countries have expressed willingness to achieve or exceed Land Degradation Neutrality. And nearly 70 countries participated in the UNCCD’s global drought initiative, which aims to shift from reactive approaches to drought to a proactive and risk-reducing approach.

Mr. Thiaw underlined the importance of promoting public awareness about desertification and drought, and letting people know the problems can be effectively tackled “through ingenuity, commitment and solidarity.”

“We all must live up to our responsibility to ensure the health of present and future generations, wholeheartedly and without delay.”

The COP15 decision on drought is expected to touch on five interrelated areas:

The campaign will be featured during UN Desertification and Drought Day (17 June), hosted this year by Madrid, Spain

Related: UNCCD’s flagship Global Land Outlook 2 (GLO2) report, five years in development with 21 partner organizations, and with over 1,000 references, is the most comprehensive consolidation of information on the topic ever assembled.

Released Apr. 27, it reported up to 40% of all ice-free land is already degraded, with dire consequences for climate, biodiversity and livelihoods.

The 15th Conference of Parties (COP15) to the United Nations Convention to Combat Desertification (UNCCD, 9-20 May, Abidjan, Côte d’Ivoire) is focussed on:

More than a dozen heads of state and government, ministers, and at least 2,000 delegates from 196 countries and the European Union, are expected to attend.

Major press events during the session can be viewed live on the UNCCD YouTube Channel here.

Off-site journalists may submit questions via email to press@unccd.int, but must identify themselves and their media organization

UNCCD COP15 is the first of the three Rio Conventions' meetings in 2022, with the Biodiversity COP15 and Climate Change COP27 convening later in Kunming, China, and Sharm El-Sheikh, Egypt, respectively.

UNCCD is the global vision and voice for land. We unite governments, scientists, policymakers, private sector and communities around a shared vision and global action to restore and manage the world’s land for the sustainability of humanity and the planet. Much more than an international treaty signed by 197 parties, UNCCD is a multilateral commitment to mitigating today’s impacts of land degradation and advancing tomorrow’s land stewardship in order to provide food, water, shelter and economic opportunity to all people in an equitable and inclusive manner. .

World “at a crossroads” in management of droughts, up 29% in a generation and worsening: UN 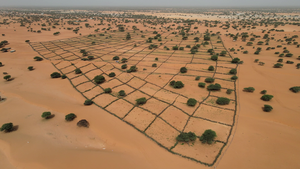