UNIVERSITY PARK, Pa. — Fruit flies synchronize the movements of their heads and bodies to stabilize their vision and fly effectively, according to Penn State researchers who utilized virtual-reality flight simulators. The finding appears to hold true in primates and other animals, the researchers say, indicating that animals evolved to move their eyes and bodies independently to conserve energy and improve performance. This understanding could inform the design of advanced mobile robots, according to principal investigator Jean-Michel Mongeau, assistant professor of mechanical engineering.

The researchers published their results yesterday, May 3, in The Proceedings of the National Academy of Sciences.

Researchers used high-speed cameras to record a fruit fly surrounded by LED video screens upon which the researchers projected footage of what a fly would see while in flight, creating an immersive virtual-reality experience and causing the fly to move as if freely flying.

“When a fly moves, it coordinates its head, wings and body to fly through the air, evade predators or look for food,” Mongeau said. “We were interested in studying how flies coordinate these movements, and we did so by simulating flight in virtual reality.”

Responding to both slow and fast visual motion in the virtual-reality flight simulator, the fly moved its head and body at different rates. The researchers took measurements and tracked the fly’s head movements to determine the direction of its gaze, since its eyes are fixed to its head and cannot move independently.

“We found that the fly’s head and body movements were complementary, in that the body moved most during slower visual motion, while the head moved most during faster motion,” Mongeau said. “The body and head working together helped stabilize the flight motion from very slow to very fast.”

Testing the concepts further, researchers immobilized the fly’s head and put it through the same visual stimuli. They found the fly could not respond to fast visual motion — demonstrating the advantage of complementary body and head movements.

“We found that the head and body working together is advantageous from an energy standpoint,” Mongeau said. “Since the head is smaller, it has less resistance to motion, or inertia, which means it can respond to quick movements, while the much larger body responds best to slower movement. Tuning these two components saves energy and increases performance not just for the fly, but also for other animals.”

Using control theory, a branch of engineering that deals with designing feedback systems like autopilots, the researchers compared the findings of the fly’s movements to other animals, including a classic study of primate movements.

“Using the same model, we looked at eye, head and body inertia ratios elsewhere in the animal kingdom, including in other insects, rats and birds,” Mongeau said. “The way the flies move their head and body is very similar to the way primates move their heads and eyes, which is remarkable since they diverged hundreds of millions of years ago.”

Just as a head is lighter than a body, eyes are lighter than a head and take less energy to move. According to Mongeau, independently moving eyes and heads marked the transition from water to land in the fossil record of vertebrates.

“As vertebrate animals transitioned from water to land more than 350 million years ago, the development of mechanisms to control head and eye movements could have had substantial evolutionary benefits,” Mongeau said. “We discovered that there is a sweet spot in eye-head-body ratios, suggesting that inertia may have been an important constraint in the evolution of vision.”

The researchers’ findings could be used to improve energy efficiency and performance in robotics, according to Benjamin Cellini, a mechanical engineering doctoral candidate and first author on the paper.

“In robotics, sensors are typically fixed in location,” Cellini said. “But in the animal kingdom, sensing and movement are coupled, as many physical sensors, like eyes, move. Inspired by biology, we can design more energy-efficient robots by making vision-based sensors mobile.” 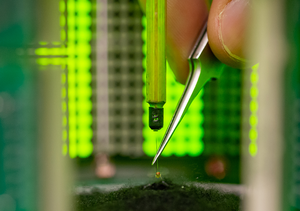