Poor sleep, difficulty moving and injuries from hitting something accidentally are just some of the challenges faced by suffers of often-painful involuntary muscle spasms.

However, an Edith Cowan University (ECU) study investigating motoneurons in the spine has revealed two methods can make our spinal cords less “excitable” and could potentially be used  to treat muscle spasms.

To move our bodies, the brain sends messages to muscles via these motoneurons in the spine which, thanks to ‘persistent inward currents’, can amplify neural signals so the brain doesn’t need to work as hard to contract our muscles.

“These amplification powers are great, but sometimes they can be too much of a good thing,” he said.

“When you want to run fast for the bus, you want this amplification; studies show without it we wouldn’t be able to produce more than 40 percent of our usual maximal force.

“But at the same time, we know some clinical conditions are characterised by hyperexcitable spinal motoneurons, with this amplification continuing without any inhibition to stop it.

“This can lead to involuntary muscle spasms that can be painful, cause injuries when people hit something accidentally, restrict movement, and wake people up at night.”

Mr Mesquita has identified a pair of seemingly opposing methods that can decrease this neural amplification, which could be further researched to potentially make life easier for people who suffer from involuntary muscle spasms.

The first involves electrical stimulation on specific nerves, which the research found can reduce the amplification in the spinal cord.

“If this method proves to be clinically effective, we could strategically place a pad and send electrical stimulation where it’s needed to inhibit the muscle with the spasms,” he said.

“These triggers could be automatic, caused by the muscle’s electrical activity or the force of the spasm itself, or it could be manual where people press a button when they have a spasm.”

“The amplification is enhanced by special chemicals such as serotonin and noradrenaline that we release when we move,” he said.

“These chemicals should be reduced when we are more relaxed than when we are contracting muscles or stressed.

“So, in some conditions such as brain injury or multiple sclerosis, relaxation therapies might have the potential to decrease this amplification and the severity of the spasms.”

Mr Mesquita said current therapy options such as medications and surgeries are expensive, invasive, and often have side effects.

"Electrical stimulation and relaxation techniques could be non-pharmacological alternatives or used in combination with other therapies,” he said.

“Now that we have shown how we can reduce this neural amplification in people without neurological disorders, the next step would be to develop therapeutic protocols to see if they're effective in people who suffer from these symptoms.

“If they are, clinical trials could then begin to examine long-term clinical effectiveness.”

‘Effects of reciprocal inhibition and whole-body relaxation on persistent inward currents estimated by two different methods’ was published in the Journal of Physiology.

The Journal of Physiology

There are no competing interests, financial or otherwise to report regarding this manuscript.

How “calming” our spinal cords could provide relief from muscle spasms 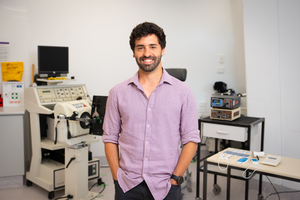