The composition of wood chemicals is very complex, which complicates their extraction and further application.

"The use of wood extractives is nothing new in itself, for example, tar was already being produced during the 17th century," explains Professor Janne Jänis from the Department of Chemistry at the University of Eastern Finland.

"Products many are familiar with include spruce sprout syrup, Abilar resin salve or even a pine-based ice cream. Pulp mills produce tall oil as a by-product, which is further refined into renewable diesel fuel and other technochemical products."

Extractives can be obtained from wood by means of solvent extraction, steam distillation, hydrolysis, and fast and slow pyrolysis.

"One troublesome group of compounds are terpenes, because finding a separation method for them is difficult. For example, pine needles contain over a hundred different volatile compounds," Jänis notes.

Access to raw materials may also present their own challenges. For example, spruce sprouts are only available during a certain time of the year.

"Spruce sprouts contain a lot of antioxidants, vitamins A and C, and terpenes. Quinic acid abundant in spruce sprouts is interesting, because it can be used as a natural starting material for medicine, such as oseltamivir used to treat influenza."

Materials obtained from birch include suberin, a natural polymer, and other rare but valuable chemicals with industrial potential. They can be used as a raw material in applications such as cosmetics, nutritional products and biopolymers. Suberin and betulin are obtained from the birch bark, and especially the outer bark contains up to 40–50 per cent of these substances.

"The bark also yields fatty acids, such as azelaic acid, which can be used to produce polyurethane. The paper, fabric and wood industries are interested in water-repellent properties. The fatty acids from birch bark have potential in this purpose, but the problem lies in their short durability. The current products are also cheap."

"The compounds from birch bark can even be used in pharmaceutical applications to treat diseases such as leukaemia, melanoma, and neuroblastoma."

The wood chemicals can be obtained using different methods, which are currently being developed for industrial use.

"The decomposition products of biomass are cooled in different temperatures, for example, in 130, 70 or 5 degrees Celsius, and we are thus able to collect distillate fractions," explains Tomppo.

"On the research side, one process can last a week, but the commercial processes are typically much faster."

"Typically only a single liquid is collected in industrial applications, and so one of our goals is to find out, if the separation of distillates during the processing can be used to facilitate further processing," says Tomppo.

The decomposition products are also collected during hydrothermal liquefaction. For example, during the initial stage, the reactor contains water mixed with biomass. The temperature is raised to 250–350 degrees Celsius and kept high for 30 to 150 minutes. About 70% of the outcome is liquids, and the remainder consists of solids and gasses.

"These products derived from the processes have been tested in applications such as wood protection, composites, pesticides, and coatings in multiple different project. The research and development work is currently carried out for example in the Sustainable Binders and Coatings (SUSBINCO) joint project," Tomppo explains.

"Researchers and multiple businesses are also interested in biochar, because of its vast application potential."

Composites and polymers from hemp fibre

Wood chips, sawdust and hemp can be used as biomass in slow pyrolysis.

“Fibre hemp is a tall and fast-growing plant. In Finland, it can be harvested in the spring, when the fibre is readily loose and the biomass is dry,” Tomppo says.

“Hemp can be used, for example, in the manufacture of natural fibre composites. One of the problems with natural fibres is water absorption, which is why in studies, various biomass distillates have been added to the fibre as protection.

Fibres and polymers can also be combined, for example, into materials used in car interiors.

Hemp shives are a side stream of the process, and these can be used as bedding for animals.

“As a product, however, hemp shives have little added value, and more valuable use for them should be found.

Six kilograms of biomass yields a couple of kilograms of char, which can be used, for example, as a soil improver.

“The idea is to make industrial side streams useful while promoting the green transition. Biomass can also be used in growing substrates for plants as a way to move away from peat,” Tomppo says. 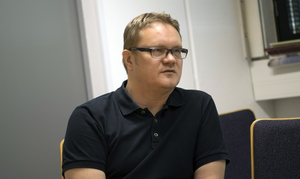 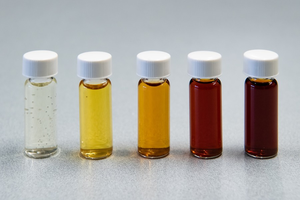 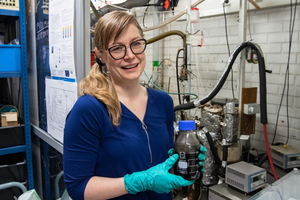