An article published in the journal Molecular Psychiatry reveals the molecular mechanisms to explain how the YWHAZ gene –related to psychiatric and neurological disorders such as autism and schizophrenia– can alter the neurodevelopmental process.

The study, which uses a zebrafish as animal model, is led by the experts Noèlia Fernàndez-Castillo and Bru Cormand, members of the Faculty of Biology and the Institute of Biomedicine of the University of Barcelona (IBUB), the Sant Joan de Déu Research Institute (IRSJD) and the Rare Diseases Networking Biomedical Centre (CIBERER), and William H. J. Norton, from the University of Leicester (United Kingdom). Among the other collaborators are experts from the Institute of Neurosciences of the UB (UBNeuro), the Institute of Photonic Sciences (ICFO) and the RIKEN Center for Brain Science (CBS, Japan).

The YWHAZ gene codes the 14-3-3ζ protein, member of a family of highly conserved proteins that are expressed in the central nervous system. This gene, located in the chromosome 8 in humans, is related to the neuron formation, differencing, and positioning processes during the neurodevelopment, mainly in studies conducted on murine models.

The starting point for this study is a massive sequencing study (Molecular Pyschiatry, 2013) led by Professor Bru Cormand, on the genetic bases of autism in which a mutation in the YWHAZ gene was identified in two affected siblings. The new study’s model is the zebrafish (Danio rerio), “a good model for studying behavioural alterations related to autism and other psychiatric disorders since the social behaviour and the interaction with the group are key in this species”, notes lecturer Noèlia Fernàndez-Castillo, from the Department of Genetics, Microbiology and Statistics of the UB.

“Zebrafish larvae are transparent and small –she continues– and allow us to evaluate the neuronal activity of the brain in vivo, which we cannot do to other animal models. We have a transgenic line of the zebrafish in which all neurons express a marker that turns fluorescent when the neuron activates. This is how we can detect when each neuron activates in the brain and we can compare what happens to animals with deficiencies in the ywhaz gene and to those in a control group”.

The animal models whose gene is deactivated present an altered hindbrain connectivity during larval stages, and a reduction of the collective neuronal activity, as stated in the study. “This would probably be the cause of the deficiencies in the neurotransmission observed in adult animals and which lead to behavioural alterations in response to novelty. In fact, neurotransmission alterations have been described in disorders such as autism, ADHD and schizophrenia”, notes Professor Bru Cormand, head of the Research Group on Neurogenetics of the UB and ICREA Academia 2021 researcher.

Furthermore, previous studies conducted on animal models showed that the spontaneous collective neuronal activity “is essential during the development, since it is involved in the configuration processes of the future neuronal networks”, notes researcher Ester Antón-Galindo, first author of the article together with Elisa Dalla Vechia (University of Leicester). “The alteration of the spontaneous activity observed in animals with the ywhaz gene deactivated since early stages (larval) would lead to an inadequate development of the neuronal connections and networks”, adds the researcher.

The team also identified key neurotransmitter alterations involved in behaviour, such as dopamine and serotonin. “When administrating drugs that affect these neurotransmission systems, behavioural alterations are re-established and are similar to those of normal fish. Therefore, this study enabled us to understand the mechanisms through which this gene causes changes and how this gene contributes to autism, which is a neurodevelopmental disorder”, notes researcher Noèlia Fernàndez-Castillo.

Specifically, the use of two medicines that modulate neurotransmission –fluoxetine and quinpirole– can reduce alterations of the social behaviour that present the mutant fish. “This is good news, because fluoxetine is already used in humans to treat other pathologies such as depression, even some symptoms of autism, such as repetitive behaviours”, says Cormand.

The gene –located in the chromosome 19 of the zebrafish– is expressed in the brain during the embryonic development (neurogenesis, neuronal differentiation, etc.). However, it has an expression restricted to specific areas of the brain in adult individuals, in particular, the Purkinje cells, a type of neurons in the cerebellum that are reduced in number and size in individuals with autism. “In mice, we observed that when these cells are not completely functional, autistic traits appear. Therefore, the results point to the same direction”, notes Bru Cormand.

In the field of clinical research, the new study adds a new gene to the dozens and hundreds of genes related to the autism spectrum disorder. “Although we know it is a pathology with a strong genetic part, which exceeds the 80%, we need more studies to define the genetic landscape, that is, all the responsible genes. When this landscape is completed, we can work on genetic-based diagnostic tools to complete the clinical diagnosis”, says Cormand.

The study identified pronounced differences in social behaviour shown in YWHAZ-gene-deficient females compared to females from control groups. However, when comparing the results of similarly deficient males to those males in control groups, these differences were not that significant.

“Although the experimental studies with the zebrafish model tend to use both sexes mixed, this study shows the importance of considering the sex of the animal. In animal experimentation, conducting studies in both sexes is decisive: until relatively recently, studies –mainly in rats and mice models– were not conducted on females, nor were possible differences evaluated due to the gender”, highlights Fernàndez-Castillo.

"Fortunately–she continues–, nowadays, policies that include the gender perspective are influencing to change these practices and thus allow us to generate a broader knowledge that can be transferable to clinical practice in men and women in a broader way.

Innovative techniques for studying the genetics of autism

"Thanks to the CRISPR technique, gene editing is possible, and it is possible to obtain gene-deficient fish in a relatively quick and easy way. The new whole brain imaging technique allows us to study in vivo the activity of all the neurons in the brain individually –which is not possible with other techniques or animal models– and to improve our knowledge of neural circuits during the development and their affectation in psychiatric disorders", notes the research team.

From an evolutionary perspective, the analyses led by the UB Professor Jordi Garcia-Fernàndez have confirmed that the ywhaz gene in zebrafish is the orthologue of the YWHAZ gene in humans (i.e., they share a common ancestor and have diverged through a process of speciation). The fact that this gene has not been duplicated in the genome of teleosts –the group to which zebrafish belong– has made it possible to use ywhaz  deficiency in zebrafish as a model to study the function of ywhaz and its involvement in neurodevelopment.

The study received funding from the Spanish Ministry of Science, Innovation and Universities and Horizon 2020 (H2020), the European Union Framework Program for Research and Innovation for the 2014-2020 period.

Deficiency of the YWHAZ gene, involved in neurodevelopmental disorders, alters brain activity and behaviour in zebrafish

Findings on how gen YWHAZ can alter neuronal development 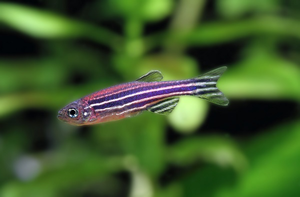