Globally there are nearly 2.8 billion people using traditional solid fuels like biomass and coals for daily cooking and heating, producing large amounts of incomplete burning products of which many are toxic, harmful to human health, but also affect climate change. Access to affordable modern energy is an important goal of sustainable development. For a long time, household energy use in rural areas is lacking of reliable systematic surveys in many developing countries. Recently, a team with experts from nearly 30 universities and research institutes in China conducted a nationwide household survey to evaluate household energy consumption structure of rural residents in China (Hong Kong, Macao and Taiwan are not covered in the present study).

In most rural homes, people often use more than one single energy in their life. A family may use electricity or gas to cook, but meanwhile coal or biomass to heat house. Considering the ubiquitous phenomenon of “energy stacking”, the researchers adopted a new method of “time-sharing fractions of different fuels” in the study to avoid the potential bias caused by a single-energy survey method. Results showed that, on average, each household used 3 different types of fuels for cooking and heating. Meanwhile, from 1992 to 2017, the average time sharing of modern energy such as electricity and gas in the cooking and heating activities in rural China continued to increase, and the electrification level of cooking was significantly higher than that of heating.

According to the study, for daily cooking, the time-sharing of E&G was on the rise, with a national average of 69% in 2017, but there were significant regional differences. Household income level was an important influencing factor, which can explain about 88% of the inter-provincial differences. In areas with higher economic level, E&G were used for cooking in a longer time. While, for space heating, though the national average of time-sharing of E&G was also increasing gradually, the fraction in 2017 was only about 20%. The traditional solid fuels still predominated the heating energy. The time-sharing and changing trend of E&G for the space heating had obvious spatial variations.

In the Southeast and Central Southern China, driven by factors like economic growth, the time-sharing of E&G for space heating increased obviously, however, in the north area, unless those under the national clean heating intervention policies, most households still relied on coals or biomass for space heating in cold seasons, and this did not change obviously over the past. Specially, in the Beijing-Tianjin-Hebei region and Fenwei Plain, after the implementation of the clean heating action, the effect of the intervention policy was very obvious, as seen from significant increases of the time-sharing of E&G in heating activities. Moreover, the study found that the clean heating policy also effectively accelerated the clean energy transition in cooking energy at the city level.

At present, the level of electrification in rural China has been significantly improved. However, there is still a long way to go before achieving the goal of sustainable development in 2030, and the difficulty of subsequent increments will be further increased, requiring more efforts from the whole society.

The time-sharing of energy fuels in cooking and heating activities in 2017. 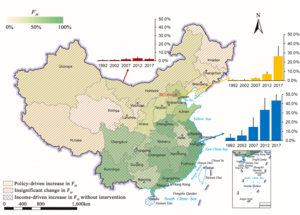