Liquid fuels with high energy density are essential in many applications where chemical energy is converted into controlled motion, such as in rockets, gas turbines, boilers, and certain vehicle engines. Besides their combustion characteristics and performance, it is also important to guarantee the safety and stability of these fuels when in use as well as during transport and storage.

One common hazard when dealing with liquid fuels is that they can evaporate quickly if given space, producing clouds of highly flammable gases. As one might expect, this can lead to catastrophic explosions or fire accidents. To tackle this problem, researchers have considered the use of gelled fuels, or fuels turned into thick gel-like substances from cold temperatures. Unfortunately, there are many aspects to optimize and hurdles to overcome before gelled fuels can go beyond the research phase.

Luckily, a team of researchers led by Prof. Naoki Hosoya from Shibaura Institute of Technology (SIT) and Prof. Shingo Maeda from Tokyo Institute of Technology (Tokyo Tech), Japan, recently investigated a more compelling solution to the safety problem of liquid fuels, namely storing them inside polymeric gel networks. In their study, the team analyzed the performance, advantages, and limitations of storing ethanol, a common liquid fuel, within a chemically cross-linked poly(N-isopropylacrylamide) (PNIPPAm) gel. This paper was made available online on April 21, 2022 and published in Volume 444 of the Chemical Engineering Journal on September 15, 2022.

First, they checked whether trapping ethanol molecules within the long and chemically intertwined PNIPAAm polymer chains helped reduce its evaporation rate. To test this, the researchers created small spheres of PNIPAAm gel loaded with ethanol and placed them on an electronic scale to record how mass changed as ethanol vaporized. They also performed this experiment with an equivalent puddle of ethanol, with roughly the same surface area and mass as the gel sphere.

They found that storing ethanol within the polymer gel completely suppressed the fuel’s tendency to rapidly vaporize. This is likely due to how ethanol molecules are “trapped” in the gel, as Prof. Hosoya explains: “The polymeric gel contains innumerable three-dimensional polymer chains that are chemically cross-linked in a strong way. These chains bind the ethanol molecules through various physical interactions, limiting its evaporation in the process.” Interestingly, the loaded gel does not behave like a wet towel. Whereas a wet towel would release its liquid if wrung, the polymeric gel did not let out ethanol easily under external forces.

With the problem of evaporation solved, the team moved on to examine the actual combustion characteristics of the ethanol in the polymeric gel network to see if they burnt efficiently. They ignited ethanol-loaded gel spheres of various sizes and observed the changes in their mass and shape profiles in real time. Based on this, they determined that the burning of the loaded PNIPAAm gel spheres consisted of two phases: a phase dominated by pure ethanol burning, followed by a second phase dominated by the burning of the PNIPAAm polymer itself.

Through a subsequent theoretical analysis of these results, the team came to an important conclusion: the first and main combustion phase of the loaded PNIPAAm gel spheres follows a constant droplet temperature model, also known as the “d2 law.” What this means is that the burning of the ethanol-loaded gel can be described by the same model used for liquid fuel droplets, hinting that their combustion performances should be similar.

Overall, this study is a stepping stone towards new ways to safely transport and store liquid fuels inside polymer gels, which could save many lives. “Polymeric gel storage could prevent explosions and fire accidents by drastically reducing the evaporation of fuels and, in turn, the formation of flammable gaseous mixtures, which can readily happen following a leak in a storage facility,” explains Prof. Hosoya. “Much work still remains to be done on this front, such as checking the stability and performance of polymeric gels at different temperature, pressure, and humidity conditions, as well as developing simpler fabrication procedures and better ways to use these fuel-loaded gels in real engines.”

Let us hope the research progresses quickly to create safer work environments in the near future.

Department of Engineering Science and Mechanics, Shibaura Institute of Technology

a Department of Mechanical Engineering, Tokyo Institute of Technology

Shibaura Institute of Technology (SIT) is a private university with campuses in Tokyo and Saitama. Since the establishment of its predecessor, Tokyo Higher School of Industry and Commerce, in 1927, it has maintained “learning through practice” as its philosophy in the education of engineers. SIT was the only private science and engineering university selected for the Top Global University Project sponsored by the Ministry of Education, Culture, Sports, Science and Technology and will receive support from the ministry for 10 years starting from the 2014 academic year. Its motto, “Nurturing engineers who learn from society and contribute to society,” reflects its mission of fostering scientists and engineers who can contribute to the sustainable growth of the world by exposing their over 8,000 students to culturally diverse environments, where they learn to cope, collaborate, and relate with fellow students from around the world.

Naoki Hosoya is a Professor at Department of Engineering Science and Mechanics, Shibaura Institute of Technology. He heads the Mechanical Dynamics Laboratory at the University where they evaluate the strength and structural integrity of structures. He has 80 articles to his credit and is a member of the Japan Society of Mechanical Engineers and Acoustical Society of Japan.

The authors declare that they have no known competing financial interests. 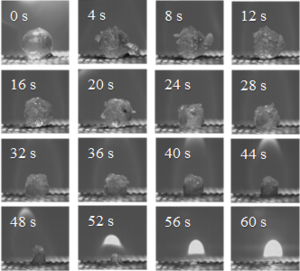 The combustion state of the polymeric gel storage