What’s going on in our brains when we are fooled by an optical illusion? How do our neurons take shortcuts to avoid sensory overload while taking in the world around us? What happens when our predictions of the world don’t match reality?

New research projects are underway at the Allen Institute to address these questions through OpenScope, the shared neuroscience observatory that allows scientists around the world to propose and direct experiments conducted on one of the Institute’s high-throughput experimental platforms.

Last year, OpenScope received a 5-year grant from the National Institute of Neurological Disorders and Stroke to support its work, in which Allen Institute experts conduct experiments proposed by researchers from outside the Institute and release the resulting data back to those researchers to analyze. The data from OpenScope projects, like all data from the Allen Brain Observatory, is also made publicly available for anyone in the scientific community to use.

The “shared observatory” approach was modeled after astronomical observatories, like the Mauna Kea Observatories in Hawaii or the Kitt Peak National Observatory in Arizona, where astronomers from around the world can sign up for time on powerful equipment too expensive for individual organizations to afford. Through OpenScope, scientists can access the Allen Institute’s equipment as well as experimental expertise, through the laboratory researchers who conduct the hands-on work.

In the era of big neuroscience data, techniques to gather that data are becoming more sophisticated — and more complicated and expensive. A community platform like OpenScope can help democratize some aspects of this kind of science, giving access to researchers who might not have the funds or time to conduct such large-scale experiments in-house, said Jérôme Lecoq, Ph.D., Associate Investigator at the Allen Institute, who heads the OpenScope program.

“We’re hoping to demonstrate that this shared platform can be a new model for generating data in neuroscience. It’s increasingly difficult to collect these kinds of datasets, so we believe there will need to be more observatories for the community, to complement the existing model of in-house research.”

What illusions can teach us about the brain

All of this year’s OpenScope projects address how the mouse brain perceives the visual world — and more specifically, how the brain’s representation of the world differs from reality in different and important ways. One project, led by UC Berkeley neuroscientists Hyeyoung Shin, Ph.D., and Hillel Adesnik, Ph.D., aims to uncover how neurons in the visual system react to optical illusions.

In this project, OpenScope scientists will show mice images of different optical illusions (yes, mice get tricked by optical illusions just as we do) and measure the activity of responding neurons using a device known as Neuropixels — tiny silicon probes capable of recording the activity of hundreds or thousands of neurons in a single experiment. Shin and Adesnik have already used a different method in their own lab to study how mouse neurons respond to optical illusions. Neuropixels will allow them to test a theory that came out of their earlier work: that neurons responding to the sight of a single object — or what the brain thinks is a single object, in the case of the illusion — switch on in synchrony.

Another OpenScope project seeks to understand how the brain processes unexpected visual information, by examining different neural signals that meet in a single neuron. Normally, the visual parts of the brain pair expectations (based on past experiences) with actual sensory information (the light that hits the retinas) to construct a representation of the world around us. Those two different signals meet and merge in individual brain cells, each signal reaching one end of long, spindly neurons whose branching processes span several layers of the visual part of the mammalian brain.

York University neuroscientist Joel Zylberberg, Ph.D., and McGill University neuroscientist Blake Richards, Ph.D., are leading a project to understand what happens to those merging signals when visual information doesn’t match what the brain expects. The Allen Institute scientists will show mice a movie while recording activity from their neurons and then at some point, Twin Peaks-style, the movie will start playing backwards.

“We want to see at the cellular level, what's going on in the brain when that mismatch happens,” Richards said.

Richards and Zylberberg, who both also led one of the first OpenScope projects, are computational neuroscientists. They spend a lot of their time devising theories about how the brain works, said Zylberberg.

With OpenScope, “instead of us publishing a theory and waiting to see if other scientists will do a related experiment, now we can take the theory, design and propose the experiment ourselves, and collaborate with the Allen Institute and then do the analysis,” Zylberberg said.

“I think it dramatically speeds up the scientific process.”

How we avoid sensory overload

Your brain is an energy guzzler. The human brain uses about 20% of the body’s energy, give or take. The mouse brain isn’t quite as greedy, in proportion to their body size, but neuron activity in general is expensive, calorie-wise. So the brain looks for shortcuts wherever it can.

The third OpenScope project is exploring a general theory around brain energy conservation known as predictive coding, which states that the brain saves much of its activity to react to the unexpected. When everything in our environment is as expected, the brain stops paying attention. This not only helps us conserve energy, the theory goes, it also helps us focus on potentially dangerous or potentially rewarding new situations that could come out of the unexpected. A specific type of neuron that inhibits the activity of other neurons may be involved in “subtracting away” what is already expected.

Imagine walking into a familiar room in your house, and everything is just as you left it. Your brain won’t have much to do in that situation. But if you walk into your living room and there’s a red box sitting on the coffee table that wasn’t there a few minutes ago, your focus will go to that new and unexpected object.

Vanderbilt University scientists Alex Maier, Ph.D., Andre Bastos, Ph.D., and Jacob Westerberg are leading a project to explore the neuroscience of predictive coding, also using Neuropixels to measure neuron activity. OpenScope researchers will record the activity of thousands of neurons in several connected brain areas as mice are exposed to expected or unexpected images. These animals are genetically modified to label certain types of neurons, allowing the researchers to know which inhibitory neuron types are active during the experiments.

“To me, this model seems to be the future. The data collection side can really only be done by the Allen Institute. I cannot think of another place where this could be done,” Maier said. “To open up this resource to investigators like us who do not have that available, and then to split the work in terms of who collects the data and who analyzes the data, that to me seems like a quantum leap.”

Research described in this article was supported by award number U24NS113646 from the National Institute of Neurological Disorders and Stroke of the National Institutes of Health. The content is solely the responsibility of the authors and does not necessarily represent the official views of NIH and its subsidiary institutes. 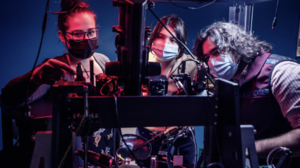 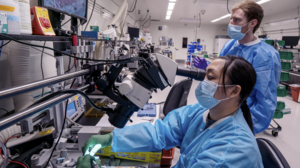