The current searches for medical catalysts mainly rely on trial-and-error protocols, due to the lack of theoretical guidance. Thus, it is of great significance to establish a rapid experimental evaluation protocol for screening catalysts in addition to the possible theoretical predictions by computation. This study is led by Prof. Jianlin Shi (Shanghai Institute of Ceramics, Chinese Academy of Sciences), and his group proposes that oxidase catalysis and oxygen reduction reaction (ORR) electrocatalysis share the identical activity origin using model single-atom catalysts (SACs), and a facile electrochemical methodology (linear sweep voltammetry) has been developed for oxidase-like activity evaluation.

The researchers chose a series of comparable SACs of relatively uniform active site as model catalysts. The nondimensionalized velocity (vn) of the TMB chromogenic reaction and the absolute value of the normalized mean current density in the LSV curves quantitatively show a good linear relationship with each other (image below), indicating the intrinsic homology between oxidase catalysis and electrocatalysis and the feasibility of electrochemical methodologies for characterizing oxidase activity. In addition, the LSV technique features a larger generality of tests than chromogenic reaction, even in simulated body fluid and DMEM. More interestingly, the cancer cell killing effects of SACs also reasonably follows the order of ORR activities. People have developed tens of thousands of catalysts for oxygen reduction electrocatalysis, this work proves that these oxygen reduction electrocatalysts are the promising candidates for oxidase mimics and therefore could be used in nanomedicine fields, such as tumor therapy and antibacterial.

Are most ORR electrocatalysts promising nanocatalytic medicines for tumor therapy? 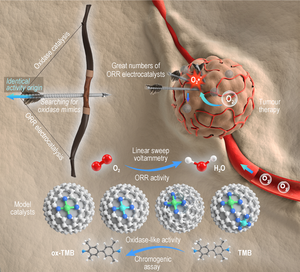 Schematic diagram of the bridging between oxidase catalysis and ORR electrocatalysis