If the United States Supreme Court overturns Roe v. Wade, state legislation would impact access to abortion care for tens of millions across the country, according to a University of Utah-led paper that published on May 9, 2022, in the journal Utah Women’s Health Review.

The paper provides the most up-to-date look at changes in distance to care resulting from restrictive legislation, and it goes further than peer-reviewed previous research by examining racial, ethnic and socioeconomic disparities.

The researchers found that millions of women will have to travel hundreds of miles to receive abortion care; the median distance to a clinic would increase three-fold, from nearly 40 miles to 113.5 miles. The lack of federal protection would create “abortion care deserts” that will disproportionally effect women of color, those living in poverty and people with less education. Large swathes of the country would experience a 100-fold increase in distance to care, particularly in the Deep South, Midwest and Intermountain West.

Data show that restricting abortion care is related to poor health outcomes for moms and infants alike. With millions of people losing access, a post-Roe country would exacerbate these health disparities on a massive scale.

“There are already huge disparities for who has access to abortion care. If Roe gets overturned and state legislation becomes law, it will widen the disparities even more,” said Brenna Kelly, a graduate student at the University of Utah and lead author of the study. “For many people who have good access now, it’s going to get worse. And the people who already struggle to get care, it's going to be near impossible.”

The authors obtained a list of abortion clinics from Advancing New Standards in Reproductive Health group’s Abortion Facilities Database that was up to date as of fall 2021. Excluding closed clinics and those without abortion services left 739 clinics for analysis. For each of the 3,108 counties in the contagious U.S., the authors established the current distance to a clinic, and then recalculated the distance by removing clinics in states with an abortion trigger law. They also calculated the relative change in distance for each county.

For every country, the researchers obtained the following demographics for women aged 15-49: race, ethnicity, educational attainment, poverty and rurality.

Both rural and urban areas will experience dramatic changes in distance. Rural areas that already have poor access to healthcare will be positioned even farther away. Of the 67 counties that would be more than 400 miles from a clinic—89% are also rural. However, people living in urban counties with trigger laws will experience the greatest relative change in distance; for example, a person in Miami-Dade County, Florida, needs to travel less than a mile for care, but that distance would increase by 426 miles should the state’s legislation become law.

“The entire South is going to be a desert for care. The most dramatic change will be for people who live somewhere that doesn’t border state where it's legal,” said Kelly. “You see that in the Intermountain West, too. People in Wyoming and parts of Nevada and Idaho come to Salt Lake City for care. Post-Roe, the nearest place will be Colorado. People in Salt Lake who right now might be minutes from care are going to be hundreds of miles from it.”

While this study is the most up-to-date analysis of the changes to abortion access, more research is needed. The analysis did not incorporate intersectionality of each county’s populations, so impacts would likely be compounded for women of color who are also impoverished, for example. Additionally, this study defined access to the distance to a clinic from point A to B. People with financial means who can fly or drive to far away clinics will have better access to care than those who rely on public transportation, will further widen health disparities.

Understanding how abortion access will change post-Roe v. Wade is crucial for health care providers and patient advocates to prepare to help people get the care that they need.

“Abortion is a very polarizing issue, but we should all consider and prepare for the disparities that would result from these large-scale changes, regardless of what position we have,” Kelly said.

Disparities in distance to abortion care under reversal of Roe v. Wade 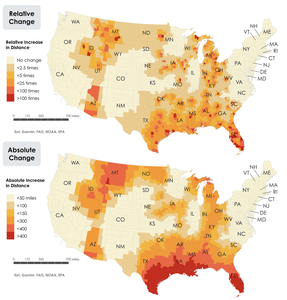