New research from Florida State University won’t only help you nail the timing for your banana bread — it could also help reduce millions of tons of food waste from the widely cultivated fruit.

A team of FSU researchers investigated the formation and spread of brown spots on bananas, a striking case of biological pattern formation. In research published in Physical Biology, the team described how the spots appear during a two-day window, rapidly expand, but then mysteriously stall, leaving a sharp distinction between spots of brown and the still-yellow peel.

“You can look at some fairly old bananas, and you will see these brown spots but with dark yellow regions in between,” said Oliver Steinbock, a professor in the Department of Chemistry and Biochemistry and the paper’s lead author. “They never really invaded those regions. They just stopped. That is scientifically interesting because it might tell you something about the mechanism that causes the browning.”

Brown spots appear on bananas when oxygen reacts with an enzyme in the fruit peel and causes the production of dark pigments. Steinbock and his team wanted to understand how spots appeared and spread and why they took on dot patterns that are so characteristic for this household staple.

Using time-lapse videos, the researchers measured how often brown spots formed and how quickly they spread over a week. They used that information to develop a model describing the speed of the reaction and the movement of oxygen in the peel. This model is now a tool for understanding the browning process and for further studies.

Previous research revealed that browning originates near tiny pores on the peel called stomata where oxygen can enter, but peels contain many more of these pores than brown spots. The researchers wondered why the reaction appears to occur only in certain places.

Their suggestion is that defective pores allow oxygen to enter. The oxygen spreads from that defect, but the peel responds quickly, leading to the sharp contrast between brown and yellow. When oxygen stops entering the peel — possibly because the offending stomata collapse — spot expansion abruptly stops.

“That’s the picture we developed based on our model and our measurements,” Steinbock said. “But what exactly does it take for this to happen? Is it a rogue pore that misbehaves? Is it a little cluster of stomata? That is a difficult question to answer at the moment.”

Bananas are among the most popular fruits in the world. According to the International Institute for Sustainable Development, farmers cultivated an estimated 117 million tons in 2019, but about 50 million tons ended up as waste. Visually unappealing fruits are a major contributor to the waste, making efforts to understand and inhibit the browning process important. Instead of turning overripe fruit into an ingredient for banana bread or storing it in a freezer, consumers often avoid brown bananas in the produce section or throw them in the trash at home.

The fruit is an important crop for countries around the world, which makes understanding how they ripen even more crucial.

“It’s really a very tricky business because bananas are very complicated systems,” Steinbock said. “If you cool them, you slow down the browning, but you mess with the taste. You can spray something onto the surface to reduce the gas exchange, but that will indirectly change the taste. It’s not an easy problem.”

Postdoctoral researcher Qingpu Wang and former graduate student Pamela Knoll were co-authors on this study. This research was supported by the National Science Foundation. 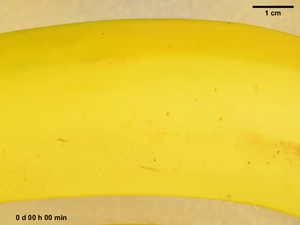 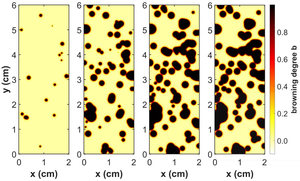