EMBARGOED FOR RELEASE UNTIL 5 A.M. THURSDAY, MAY 12

“This is common mating behavior in insects and some other animals: males present females a tasty or valuable gift – it’s like Valentine’s Day, but every day,” said Coby Schal, Blanton J. Whitmire Distinguished Professor of Entomology at NC State and co-corresponding author of the paper.

The study shows, however, that females averse to the simple sugar glucose get an unpleasant surprise when they mix their saliva with the male secretions – saliva degrades the sweet treat of complex sugars to glucose, which becomes a bitter pill that ends the courtship ritual, with the female scurrying away without mating.

“We’re seeing glucose-averse female German cockroaches turning down this nuptial gift – and the chance to mate – and wanted to understand more about the mechanism behind it,” said Ayako Wada-Katsumata, principal research scholar at NC State and co-corresponding author of the paper.

Generally, cockroaches love sugar. But some have developed an aversion to glucose; Wada-Katsumata in 2013 published a paper that showed the neural mechanism behind this aversion in German cockroaches, a behavior that perhaps has become more pronounced due to the presence of the simple sugar in roach baits placed inside homes. In a 2021 paper, Wada-Katsumata and Schal showed that cockroach saliva converts complex sugars into glucose.

“Male cockroach secretions have different types of sugars – in this case maltose and maltotriose, which are usually preferred by females – as well as some fats,” Wada-Katsumata said. Maltose is relatively easy to convert to glucose, while maltotriose is more complex and takes a bit longer to break down into glucose, she said.

“Cockroach saliva has a class of chemicals that breaks down sugars,” Schal said. “As females feed on their gift, maltose is rapidly converted to glucose, and glucose-averse females sense a bitter taste and stop feeding, which also ends the mating opportunity.”

The cockroach mating process is interesting but likely unfamiliar to bipeds. Males approach females, raise their wings, and release chemicals via the tergal gland on their backs. Females attracted to the secretion will climb onto the male’s back and feed on the secretion. While she feeds, the male will telescope his abdomen under the female, grab her with an elongated hooked penis and move into position for mating. This courtship process takes only seconds; it is here that the rapid chemical conversion of complex sugars to simple sugars in saliva could kill the mood for glucose-averse females. If successful, though, roaches engage in a back-to-back, up to 90-minute-long mating session, with the male using a second penis to transfer a sperm package to the female.

In the study, the researchers performed various experiments to ascertain how glucose aversion affects cockroach courtship. They found that glucose-averse females more frequently interrupted feeding due to their aversion, especially when feeding from a wild-type male – one that was not averse to glucose. Glucose-averse males often had higher levels of maltotriose in their secretions, which converted less easily to glucose and therefore gave those males extra time to begin mating.

The researchers also changed the quality of the male secretion, substituting fructose for the glucose and maltose secretions. Glucose-averse females enjoyed fructose and fed on it longer, resulting in more successful mating sessions.

“This study is a direct way to show that the quality of secretion affects female behavior and mating success,” Schal said. “There is a tradeoff between sexual selection and natural selection. Think of deer as an example. Male deer have horns, not for natural selection – horns actually put males in danger from predators and hunters – but for sexual selection to appeal to females and serve as useful weapons in competition with other males. Similarly, the cockroach’s tergal gland evolved for attracting females in the context of sexual selection.”

“Wild-type females accept the sugary secretions. Glucose-averse females don’t accept the wild-type secretions because they easily convert to glucose. Males can change the composition of secretions – perhaps producing more maltotriose which takes longer to convert to glucose – or try to mate faster. In short, the glucose aversion trait evolved under natural selection, but under sexual selection it is causing the male to modify his sexual secretion and behavior,” Wada-Katsumata said.

The 2013 study informed bait manufacturers not to use glucose in baits. The 2021 studies expand this recommendation to all sugars that contain glucose. Baits made with glucose, sucrose, maltose and other sugars will be ignored by glucose-averse cockroaches. As more cockroaches with glucose aversion survive, that trait will be passed down in greater numbers.

“We are constantly in an evolutionary battle with cockroaches,” Schal said. “Evolution can be sped up tremendously in the urban, human environment because the selection force imposed on insects, especially inside homes, is so intense.”

Published: May 12, 2022 in Nature Communications Biology

Abstract: The evolution of adaptive behavior often requires changes in sensory systems. However, rapid adaptive changes in sensory traits can adversely affect other fitness-related behaviors. In the German cockroach, a gustatory polymorphism, ‘glucose-aversion (GA)’, supports greater survivorship under selection with glucose-containing insecticide baits and promotes the evolution of behavioral resistance. Yet, sugars are prominent components of the male’s nuptial gift and play an essential role in courtship. Behavioral and chemical analyses revealed that the saliva of GA females rapidly degrades nuptial gift sugars into glucose, and the inversion of a tasty nuptial gift to an aversive stimulus often causes GA females to reject courting males. Thus, the rapid emergence of an adaptive change in the gustatory system supports foraging, but it interferes with courtship. The trade-off between natural and sexual selection under human-imposed selection can lead to directional selection on courtship behavior that favors the GA genotype. 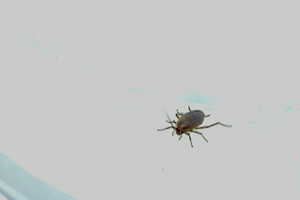