“Tom and Becky…tried to estimate how long they had been in the cave…their candles were not gone yet…Tom said they must go softly and listen for dripping water—they must find a spring” (an excerpt from ‘The Adventures of Tom Sawyer’). Perhaps the kids, tried to explore the terrain of the cave making use of their senses to find a way out. This in fact, is an inherent ability that human beings and other advanced life forms on Earth have developed over several years of the evolutionary process. The ability to process information obtained from their immediate environment helps them perform difficult tasks. Even the simplest form of life (a single cell), can sense various chemical and physical stimuli and process this information through their intrinsic complex intracellular logic to perform complicated cellular functions such as cell division, cell motility, cargo transport, etc. (Figure 1A).

In recent years, the aim of developing artificial life-like systems has led to the exploration of complex chemical reactions, which reside in an out-of-equilibrium state. However, harnessing the complete potential of such systems, regarding their ability to process information from multiple external stimuli and perform programmable spatiotemporal functions remains unexplored. Scientists at the Center for Self-assembly and Complexity (CSC), the Institute for Basic Science (IBS, South Korea), have now come up with out-of-equilibrium chemical systems, which can sense multiple external stimuli e.g., light, sound, atmospheric oxygen, etc., and process this information based to execute programmable life-like spatiotemporal functions (Figure 1B). The researchers name these as ‘Chemical logic systems’ (CLSs) since the information provided to these systems from multiple external inputs is processed by following Boolean logic to arrive at a desired outcome. The researchers describe two CLSs in this study, one of which leads to the formation of programmable spatiotemporal chemical patterns and the other results in the programmable spatiotemporal motion of a floating cargo (Figure 2). “Choosing the appropriate out-of-equilibrium systems is an important aspect in developing CLSs. Working on this project was real fun because most of the times we were able to predict the experimental results according to the program that we set’’, explains Seoyeon Choi, a graduate student at POSTECH and the first author of this study.

The researchers first designed CLS-1 based on the redox chemistry of methyl viologen (MV2+), which is known to get reduced to its radical cationic (MV•+) form by visible light irradiation, in the presence of a photosensitizer and a sacrificial reductant. On exposing yellow colored CLS-1 solution taken in a Petri dish with visible light, audible sound and atmospheric oxygen, it first turned dark green and then gradually reorganized into a spatiotemporal pattern consisting of dark green and yellow concentric rings (a desired output). The absence of any of the three input signals lead to an undesired output, e.g., a random chemical pattern. The results clearly suggested that CLS-1, exhibited an AND logic-gate response towards the three inputs: light, sound, and oxygen (Figure 2, top). The chemical gradients within the spatiotemporal patterns could be further tuned by utilizing a photomask during the photoirradiation process.

The team next explored CLS-2 that exhibited a fast and reversible dissolution of a peptide-bases assembly in response to blue light irradiation. This was accompanied by a reversible change in surface tension of the solution, resulting in an induced Marangoni effect, which can be utilized to propel a floating cargo over a solution surface. The researchers then executed such cargo motion in presence of audible sound and observed that the generated concentric ring-shaped topography of the solution surface acted as templated tracks for the controlled spatiotemporal movement of a floating cargo (Styrofoam bead). The cargo movement could be effectively programmed only when light and audible sound were simultaneously irradiated, CLS-2 therefore exhibited an AND logic-gate response towards the two input stimuli (Figure 2, bottom).

The authors further observed that the at least two different types of cargo movement could be achieved by controlling the parameters of the audible sound input. A sound input of 38 Hz and 0.06 g (Audio-I) resulted in an orbital motion of the cargo along the circular tracks (Figure 3A, left). On the other hand, with a slightly tweaked sound input (42 Hz and 0.08 g; Audio-II) a short distance radial motion of the cargo was observed (Figure 3A, right). The application of the two input signals was further combined in such a way to execute a predetermined sequence of orbital and short radial motion of the cargo, which resulted in an even higher level or complicated functions such as navigating a cargo through a maze (Figure 3B and video). According to Dr. Mukhopadhyay, a co-corresponding author in this work who led this study, “Designing the maze was a real challenge for us. A conventional maze with real physical barriers would have interfered with the Faraday wave formation. To circumvent this issue, we thought of using a maze shaped photomask and projected it over the CLS-2 solution. This helped us in navigating the floating cargo only along a complex predetermined path, where it was dually exposed to light irradiation and sound waves”.

The researchers at the CSC-IBS believe that the present strategy of exploiting audible sound and light in combo to maneuver a cargo through a maze, avoiding the conventional methods based on chemotaxis, phototaxis, magnetotaxis, etc., adds a new tool for researchers to develop materials exhibiting life-like properties and in the field of systems chemistry in general. Prof. Kimoon Kim, Director of the Center for Self-assembly and Complexity, who supervised the overall research opines, “The development of out-of-equilibrium CLSs can be one of the missing pieces of a very complex jigsaw puzzle that can connect the living and the non-living domains. The present result is just a small step in this direction, to achieve a similar level of complexity of CLSs that operate within a cell remains a distant goal”. He laughs and adds further, “At present, the chemicals act merely as characters provided with a programmed script. Perhaps, like a movie director, I can command—Light… Sound… and Action!”

The results of this study were published on May 13 in Chem (Cell Press). 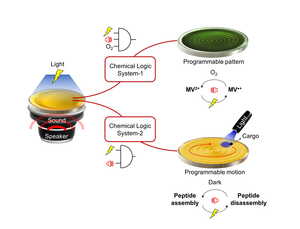 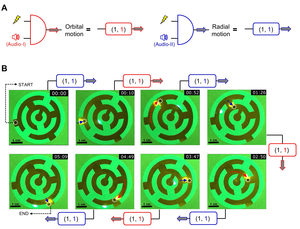 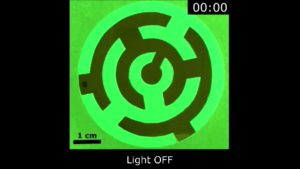