Did the world’s largest prehistoric shark need an orthodontist, or did it just have a bad lunch?

Researchers from North Carolina State University and the North Carolina Museum of Natural Sciences examined a deformed tooth from an Otodus megalodon shark in a search for the root cause: was it developmental, or related to feeding? The work could give paleontologists more insight into the developmental processes associated with tooth injury in ancient sharks, as well as feeding behavior.

At issue is an abnormality referred to as double tooth pathology, in which a single tooth appears “split.” There are several possible causes: during tooth development two tooth buds can fuse into one or one tooth bud can split into two (a process called gemination). Gemination and fusion can be caused by disease, genetics or physical injury to the tooth bud.

“We don’t have a lot of data on double tooth pathologies in ancient shark species,” says Harrison Miller, former NC State undergraduate student and corresponding author of a paper describing the work. “So this was an opportunity to fill in those gaps – and perhaps learn more about the sharks in the process.”

The researchers examined three abnormal teeth: one 4-inch tooth from O. megalodon, an apex predator the size of a school bus that ruled the seas in the Miocene and early Pliocene periods (from 11 to 3.7 million years ago); and two from Carcharhinus leucas, a much smaller bull shark species that lived during the same period and still roams the seas today.

All three oddly-shaped teeth displayed a form of double tooth pathology. The researchers compared the teeth to normal teeth from both species and performed nano-CT imaging of the deformed teeth so that they could examine what was going on inside.

While the pathological teeth did have more internal canals than normal teeth – confirming either the incomplete splitting or joining of two teeth during development – the researchers were unable to definitively establish a developmental cause.

“Part of the difficulty was in applying terminology from work in humans and other mammals to sharks,” says Haviv Avrahami, NC State doctoral student and paper co-author.

“Sharks have cartilaginous skeletons, not boney skeletons, so preservation of their jaws is rare in the fossil record, and usually, we only find the individual isolated teeth. Additionally, sharks have different mechanisms for tooth development – they have continuous tooth replacement, so you can’t look at what is happening in the rest of the jaw to rule out fusion or gemination.”

Given what the researchers know about this kind of pathology in modern shark teeth, however, they lean toward feeding-related injury as a more probable cause.

“With O. megalodon in particular, the current understanding is that they fed mostly on whales,” Avrahami says. “But we know that tooth deformities in modern sharks can be caused by something sharp piercing the conveyor belt of developing teeth inside the mouth. Based on what we see in modern sharks, the injury was most likely caused by chomping down on a spiny fish or taking a nasty stab from a stingray barb.”

“We also know that O. megalodon had nesting grounds around Panama, and that relatives of modern stingray species also inhabited that area,” Harrison says. “And these spines can get very thick. So a tooth injury of this type could indicate that O. megalodon was more of a generalist predator – and that this O. megalodon in particular just had a bad day.”

Lindsay Zanno, head of paleontology at the N.C. Museum of Natural Sciences, associate research professor at NC State and co-author of the research, agrees.

“When we think of predator-prey encounters, we tend to reserve our sympathy for the prey, but the life of a predator, even a gigantic megatooth shark, was no cakewalk either.”

The work appears in PeerJ, and was made possible by Mark Kostich’s donation of the pathological O. megalodon tooth (NCSM 33639) to the Paleontological Collections of the N.C. Museum of Natural Sciences.

“We’re incredibly grateful to Mark for gifting this specimen to the museum so we could learn more about these ancient animals,” Zanno says. “So many important fossils are hidden away in private collections, where they are unable to shed new light on our wondrous world.”

Note to editors: An abstract follows.

Abstract:
Double tooth pathologies are important indicators of trauma, disease, diet, and feeding biomechanics, and are widely documented in mammals.  However, diagnosis of double tooth pathologies in extinct non-mammalian vertebrates is complicated by several compounding factors including: a lack of shared terminology reflecting shared etiology, inconsistencies in definitions and key features within and outside of mammals (e.g., gemination, fusion, twinning, concrescence); differences in tooth morphology, heterodonty, regeneration, and implantation between mammals and non-mammalian vertebrates; and the unmet need for diagnostic criteria that can be applied to isolated teeth, which are common in the fossil record.

Here we report on double tooth pathologies in the lamniform and carcharhiniform Cenozoic sharks Otodus megalodon (NCSM 33639) and Carcharhinus leucas (NCSM 33640, 33641).  All three teeth bear a singular bifid crown with mirrored halves and abnormal internal microstructure—a single, bifurcating pulp cavity in C. leucas and a more than tripling of vessels in O. megalodon (from two to seven main ascending canals).  We identify these abnormalities as likely examples of gemination due to their symmetry, which rules out fusion of tooth buds in one tooth file in different developmental stages in polyphyodont taxa; however, we note that incomplete forms of mesiodistal tooth fusion can be morphologically indistinguishable from gemination, and thus fusion cannot be rejected.  We further compile and recategorize, when possible, the diversity of tooth pathologies in sharks.

The identification of double tooth pathologies in O. megalodon and C. leucas has paleobiological implications.  Such pathologies in sharks are largely hypothesized to stem from trauma to developing tooth buds.  Carcharhinus leucas is known to feed on prey documented to cause feeding-related oral traumas (e.g., rays, sawfish, spiny fish, and sea urchins).  However, O. megalodon, is considered to have largely fed on marine mammals, and perhaps turtles and/or fish, raising the possibility that the dietary diversity of this species is, as of yet, underappreciated.

The genetic underpinnings of ​​tooth morphogenesis and regeneration is highly conserved throughout vertebrate evolution, suggesting a homologous framework can be established.  However, more research is needed to link developmental, paleobiological, and/or paleoenvironmental factors to gemination/fusion in polyphyodont taxa.  We argue that the definitions and diagnostic criteria for dental pathologies in vertebrates require standardization in order to advance macroevolutionary studies of feeding trauma in deep time. 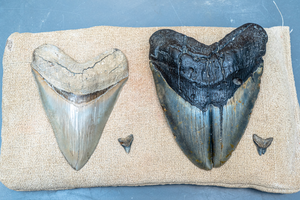