In a new paper published in Light Science & Application, a team of scientists, led by Dr. He Ding from School of Optics and Photonics, Beijing Institute of Technology, Prof. Xing Sheng from Department of Electronic Engineering, Tsinghua University, and co-workers have developed an optoelectronic NIR-to-visible upconversion device based on designed semiconductor heterostructures, exhibiting a linear response, fast dynamics, and low excitation power. The temperature-dependent photoluminescence characteristics of the optoelectronic upconversion device are systematically investigated and demonstrated its capability for thermal sensing.

The proposed temperature sensing strategy is based on a fully integrated optoelectronic upconversion device schematically shown in Figure 1a, consisting of a low-bandgap, gallium arsenide (GaAs) based double junction photodiode and a large-bandgap, indium gallium phosphide (InGaP) based light-emitting diode (LED) connected in series. Figure 1b displays the cross-sectional scanning electron microscope (SEM) image of the device structure, which was grown on the GaAs substrate with a sacrificial interlayer. As demonstrated previously, the lithographically defined and epitaxially released microscale devices (size ~300×300 μm2) realize efficient NIR-to-visible upconversion with a linear response and ultrafast dynamics (Figure 1c)

Under near-infrared light excitation in the wavelength range of 770–830 nm, the red emission of the optoelectronic upconversion device is accompanied by a decreased intensity and a redshift of the emission peak from 625 nm to 637 nm with increasing temperature (Figure 2a). Based on synergic factors ascribed to the materials characteristics and structure design, an intensity-temperature sensitivity of ~1.5% °C-1 and a spectrum-temperature sensitivity of ~0.18 nm °C-1 (Figure 2b).

With such a robust optoelectronic upconversion optical thermometer, the scientists propose several applications:

“Through a large-area device array of the optoelectronic upconversion devices, we can perform spatially resolved thermal sensing (Figure 3a). For example, we use air guns to generate hot airflow that blows on the sample, disturbs, and eventually extinguishes the upconversion emission. According to the relationship between emission intensity and temperature, we can obtain the spatial distribution and real-time changes of temperature.” said He Ding at Beijing Insitute of Technology.

“The upconversion device can be released from the grown substrate and further integrated with fiber optics to form light-guided thermal sensors. Complementary with tethered electrical sensors, such an optical-based technique is more suitable for use in environments with strong electromagnetic interferences, and in particular, capable of obtaining signals during magnetic resonance imaging (MRI). Such a fiber-coupled, portable system can be conveniently applied for biomedical applications, for example, monitoring the exhalation behavior closed to the mouth of human and deep tissue with the implantation in the mouse brain, as a proof-of-concept demonstration (Figures 3b and 3c).” said Xing Sheng at Tsinghua University.

“The MRI-compatible, implantable sensors combined with fiber optics offer both research and clinical significance, with a potential for localized temperature monitoring in the deep body. These materials and device concepts establish a power tool set with vast applications in the environment and healthcare.” Xing Sheng concluded and forecasted.

An optoelectronic thermometer based on microscale infrared-to-visible conversion devices 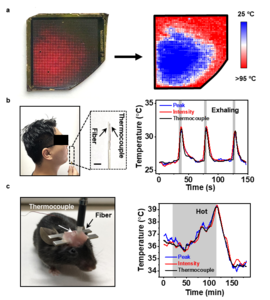