What foods comes to your mind when  you think about “The Mediterranean Diet”? For most people, the term evokes strong associations with fresh, minimally-processed ingredients – olive oil, fresh fruits, vegetables, legumes, and whole grains, followed by fish and animal products – together making up a form of local food production and consumption that holds societal, economic, and cultural benefits. Encompassing countries from Italy to Lebanon and Morocco to Greece, can this diet act as a model for more nourishing and environmentally friendly food systems?

In a new report, researchers have examined 10 Mediterranean countries to clarify one important, but often unknown, factor: the status of agrobiodiversity (plants, animals, and microorganisms) in farms, markets, and on plates. Using the Agrobiodiversity Index, a tool developed by the Alliance of Bioversity International and CIAT, the report has identified risks (such as endangered species), but also opportunities (alternative sources of income, climate-smart crops, and nutritious food options).

The report’s implications: diets are just one part of our food system

The good news is that all the Mediterranean countries assessed show above average conservation of agrobiodiversity, reflecting both the region’s natural wealth of crops and wild plants, as well as efforts to protect them. However, despite some countries (Lebanon, Italy, France and Spain) showing particularly high levels of diversity in consumption, the overall Mediterranean rating is no higher than the global average. Production scores were even lower, significantly below the global average.

What does this gap suggest? Botanical gardens, genebanks, and nature reserves may be safeguarding agrobiodiversity and diets may include varied foods (including imported items); but, at present, Mediterranean production landscapes are largely dominated by only one or a handful of crops, with only a very small share of natural vegetation (<10%). This low on-farm agrobiodiversity puts agricultural systems and livelihoods at increased risk from pest and disease outbreaks, soil degradation, and unstable yields - and these risks are set to get worse under climate change.

As the report’s authors point out, a focus on diet alone will not capture all parts of the food system. Instead, actions and commitments must be made to mainstream agrobiodiversity – in other words, make sure that diverse species are integrated across the production-consumption spectrum.

Countries with the highest agrobiodiversity scores recorded by the report have already taken actions to mainstream agrobiodiversity into their food systems – through policies, dietary guidelines, investment in organic agriculture, and more. Which further actions are needed depends on current agrobiodiversity statuses: countries with lower scores need to prioritize immediate conservation efforts to halt ongoing diversity loss, while countries with higher scores can focus on increasing landscape complexity (planting more kinds of crops, or embedding natural habitat within farmland, for example with hedgerows and woodlots). Other actions include better monitoring of farming practices such as intercropping and agroforestry, and increasing farmer access to diverse seeds.

For these actions to succeed, stronger national commitments to agrobiodiversity are needed. Currently, country efforts to meet the global targets set by the UN Convention on Biological Diversity fall short, missing the links between safeguarding genetic diversity and meeting human needs such as nutrition and livelihoods. Countries currently have an opportunity to improve this as they revise national action plans within the Post-2020 Biodiversity Framework.

How might this translate to the farm, market, and plate? One example: commitments for sustainable food sourcing in markets (such as procurement policies or incentives to sell diverse, locally produced foods) would make it more profitable to grow different crops. By spurring on-farm diversification, this could yield benefits such as healthy soils, increased micronutrients in diets, more pollinators, and extra income for farmers.

The bottom line is that, like many other areas around the world, the Mediterranean still has progress to make in guaranteeing the status of its natural wealth of agrobiodiversity. Greater awareness of biodiversity’s benefits, combined with ongoing efforts to diversify landscapes, could ensure the region’s food systems become more resilient in years to come.

·       A press summary with key messages and takeaways is also available for download and use by interested parties here.

·       To read about the scientific basis for the Agrobiodiversity Index, read this article. 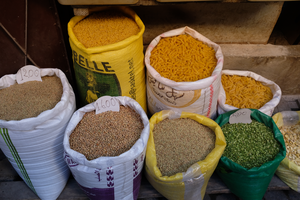 Agrobiodiversity at the market (2) 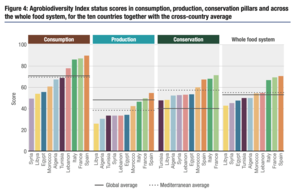