This study is led by Dr. Prof. Yong Wei and Dr. Kai Fan from Institute of Geology and Geophysics, Chinese Academy of Sciences (IGGCAS). Authors and their colleagues from the National Space Science Center, Chinese Academy of Sciences, Max-Planck-Institute for Solar System Research, the Sun Yat-Sen University, and the Peking University have developed a comprehensive method, which include the noise reduction and the calculation of the plasma moments, to derive the solar wind parameters from the Tianwen-1 observations provided by the Chinese Planet Exploration Program Scientific Data Release System (http://202.106.152.98:8081/marsdata/web/datainfo/).

One aspiration of the Tianwen-1 mission is to disclose the missing links between Martian ion escape processes and their consequences for Martian paleoclimate. Previously, the results based on former Martian missions suggest that the ion escape rate accounts for a few centimeters thickness of global water on average. However, there is a burst of ion losses observed during the periods of enhanced solar activity. To better understand the impact of solar activity on the Martian paleoclimate, the simultaneous observation of the upstream solar wind and the Martian space would be essential.

The Tianwen-1 consists of three components: an orbiter, a lander, and the Zhurong rover. MINPA instrument onboard the orbiter is designed to detect ions and energetic neutral atoms (ENAs) in the Martian space. MINPA can distinguish several different species of ions, such as H+, He+, O+, O2+, and CO2+, and resolve proton and oxygen atoms from ENAs measurements. MINPA provides ion data in the energy range of 2.8 eV to 25.9 keV, with the highest sampling cadence of 4 seconds. From October 2020 to January 2021, on the journey to Mars, MINPA monitored solar wind plasma from 25,765,773 to 3,559,077 kilometers upstream of Mars (Figure 1). Meanwhile, MAVEN and Mars Express conducted plasma measurements in the Martian space. The simultaneous observations from Tianwen-1, MAVEN, and Mars Express fulfilled the long-awaited multi-mission joint survey of Mars of the international academic community.

The researchers also derived solar wind velocity, which suggests the good performance of the MINPA instrument. Even though the lander and the rover sheltered part of the instrument's field of view during the cruise phase, the solar wind plasma from MINPA onboard Tianwen-1 showed a consistent tendency with that from OMNI, the Mars Atmosphere and Volatile EvolutioN (MAVEN) mission, and the Mars Express (Figure 3 and Figure 4).

The solar wind plasma upstream of Mars observed by Tianwen-1: Comparison with Mars Express and MAVEN

China's Tianwen-1 Solar Wind Observation: The beginning of a multi-spacecraft exploration in Martian space by China, the U.S., and Europe 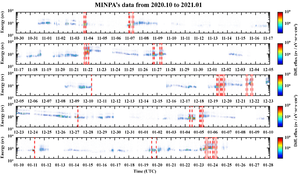