This study is led by Dr. Zhenwei Qiu (National Museum of China) and Dr. Yijie Zhuang (Institute of Archaeology, University College London). The Hanjing site is situated on the flood plains of the Mid-lower Huai River. Three seasons of field surveys and excavations were carried out by the joint archaeological team of the National Museum of China, Nanjing Museum and Sihong County Museum from 2014 to 2016, with Professor Lina Zhuang as the director. The rice-field-like archaeological features suggest some initial forms of management of local hydrology at Hanjing (see image below). “These features would have facilitated irrigation and drainage in the field, which were crucial for rice cultivation” Zhenwei says.

Microscopic analyses of macro- and micro-plant remains from the Hanjing site were conducted by Zhenwei Qiu at the Institute of Archaeology, National Museum of China. Charred rice grains and spikelet bases recovered by floatation confirmed that domesticated rice and wild rice co-existed at the Hanjing site. The direct radiocarbon dates of charred rice grains fall between 8400-8000 cal. BP. The morphological features of rice phytoliths (Oryza-type bulliform cells and double-peaked Oryza-type glume cells) from rice leaf and husk point to discrepancy of prediction on rice domestication at the Hanjing site.

The team also examined microstructure of some potsherds. Charred remains of rice plants or impressions can be found on the inner and/or outer surfaces as well as in the cross-section of the potsherds. Some translucent residues were identified to be phytolith from rice husk (see image below).

Combined zooarchaeological evidence with the archaeobotanical data, it is clear that hunting, fishing, rice cultivation and wild plant food collection were all important parts of the subsistence economy at Hanjing. “This subsistence economy points to a shared characteristic of the subsistence strategies amongst the Early to Mid-Neolithic sites in the Huai valley, in which hunting and gathering still played a very important role in food production” Qiu says.

The team believes that the Hanjing site presents one of the earliest evidence of rice cultivation and domestication in the Huai River valley, supporting this region as another important center for early development of rice economies that was less well understood, and that might have experienced a different pathway to the beginning and development of rice farming compared to the Middle and Lower Yangtze River regions.

Measurements of Oryza-type bulliform cells and double-peaked Oryza-type glume cells show that these two types of phytoliths hold different significance to predict rice domestication at Hanjing. “This discrepancy of phytolith identification and prediction of rice domestication might be attributed to several analytical and methodological factors, including analytical approaches and sampling issues, statistical methods applied during measurement and data analysis” Qiu says. Future effort is required to further investigate whether such a discrepancy is related to the nature of rice plant physiology in initial rice cultivation or to some other factors.

Rice cultivation recorded at a Neolithic site 8000 years ago 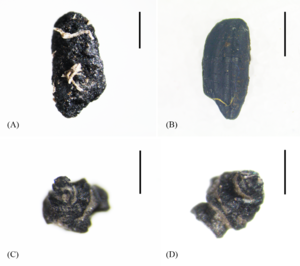