In April 2019, the Event Horizon Telescope (EHT) Collaboration unveiled the first-ever image confirming the existence of a black hole. The image shows the black hole at the center of the distant Messier 87 (M87) galaxy, which lies over 50 million light-years from Earth.

To the outside observer, the reveal of the first M87 image was the culmination of a multi-year effort that pooled resources, facilities, expertise, and tools from around the world. The EHT was far from finished, however, and in May 2022 it unveiled a new image of a black hole, this time at the center of our own Milky Way galaxy.

Astronomers have posited the existence of a black hole in the middle of the Milky Way ever since Karl Jansky in 1933 named the mysterious radio signal coming from our galaxy’s center Sagittarius A* (Sgr A*). Until now, though, researchers could not confirm its existence. By bringing observers from the world’s leading astronomical observation facilities together with theorists who use high-performance computing (HPC) to develop models of black-hole accretion and emission, the EHT provided definitive evidence that Jansky's hypothesis is true.

Among the contributors to the EHT Consortium is Prof. Dr. Luciano Rezzolla of the Goethe University Frankfurt, whose team used HPC resources at the High-Performance Computing Center Stuttgart (HLRS) and the Leibniz Supercomputing Centre (LRZ) to create high-resolution models of the black hole. Both HLRS and LRZ are member centers of the Gauss Centre for Supercomputing (GCS).

“Our team performs simulations solving the equations of general-relativistic magnetohydrodynamics (MHD) and of radiative transfer," Rezzolla explained. "In this way, we can produce images that are mathematically and physically consistent, and that can then be compared with images coming from observations,” Rezzolla said. “For M87, we made about 60,000 simulation images, but for Sgr A*, we produced almost two million.”

Computing to the center of the galaxy

Although it seems counterintuitive, the EHT researchers needed to create many more simulation images of Sgr A* because of its relative proximity to Earth. “Sgr A* is an object that we know very well from an astronomical point of view,” Rezzolla said. “There are decades of observations done at many different wavelengths, which put constraints on our theoretical models, and we had to do a far more thorough investigation to convince ourselves that what we were seeing was a black hole. From a computational standpoint, that means using a lot more simulations than we did modelling M87, and not only in terms of resolution and physical condition, but in terms of the microphysical modelling, which had to be revised and extended.”

While working on the M87 galaxy, the researchers learned that making their codes as generic as possible would not only ensure that they were accounting for many of the complex, possibly unknown physical phenomena surrounding a black hole, but also that they could apply their methods to other celestial objects like Sgr A*. The team also works in parallel with a group at the University of Illinois in Urbana-Champaign and at National Center for Supercomputing Applications, (NCSA) and has taken extensive efforts to verify that both teams’ respective computational codes are designed to yield the same results when given the same inputs.

Essentially, both teams follow a similar approach: First, they run detailed MHD simulations, which produce models of the dynamics of the astrophysical plasma as gravity pulls it into the black hole. Once the simulation data is available, the researchers then focus on developing images that not only accurately reflect the data from simulations, but also what would be observed from an earthbound observatory. These images are then compiled together to create a rendering of the black hole’s “shadow,” or the pattern of light and plasma circulating at the edges of the black hole. Because black holes do not emit light, this shadow is the only way to actually reveal their presence.

While the Sgr A* black hole was more difficult to model than the M87 black hole, Rezzolla pointed to computational advancements, including next-generation systems at both HLRS and LRZ, that helped the team overcome these additional hurdles and create its models more efficiently than during the M87 work. “We had better codes and better models for this work, as well as access to better computers through GCS. This meant that we could run far more models than we could handle in the past, and that the runtime was shorter in some cases. That helped cut down our analysis time,” he said. “We published our findings about M87 in 2019, which meant most of the work was done in 2018, and the same timeframe is true here, so you’re looking at a 4-year gap in machines and can see a big jump in performance.”

Having reached this important milestone, the team at Goethe University Frankfurt has begun to focus its research efforts on looking closely at the light polarity in its simulations. Astronomers have at least two different theories about the role that magnetic fields play when the plasma accretes onto a black hole. By studying how light moves and bends in this space, Rezzolla and his team aim to improve our understanding of a phenomenon that we have only begun to comprehend.

Rezzolla indicated that in the future the team wants to work closer with user support staff at the GCS centers to help optimize its compute code, especially to take advantage of GPU accelerators, which have become an increasingly important computing technology that can help researchers who are working on more data-intensive applications.

Funding for Hawk was provided by Baden-Württemberg Ministry for Science, Research, and the Arts and the German Federal Ministry of Education and Research through the Gauss Centre for Supercomputing (GCS).

Funding for SuperMUC-NG was provided by the Bavarian State Ministry of Science and the Arts and the German Federal Ministry of Education and Research through the Gauss Centre for Supercomputing (GCS). 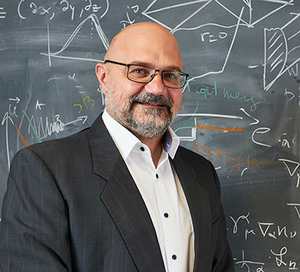