(Salt Lake City) - The bottom of the ocean is full of mysteries but scientists have recently uncovered one of its best-kept secrets. For 25 years, drug hunters have been searching for the source of a natural chemical that had shown promise in initial studies for treating cancer. Now, researchers at University of Utah Health report that easy-to-find soft corals—flexible corals that resemble underwater plants—make the elusive compound.

Identifying the source allowed the researchers to go a step further and find the animal’s DNA code for synthesizing the chemical. By following those instructions, they were able to carry out the first steps of re-creating the soft coral chemical in the laboratory.

“This is the first time we have been able to do this with any drug lead on Earth,” says Eric Schmidt, Ph.D., professor of medicinal chemistry at U of U Health. He led the study with Paul Scesa, Ph.D., postdoctoral scientist and first author, and Zhenjian Lin, Ph.D., assistant research professor.

The advance opens the possibility of producing the compound in the large amounts needed for rigorous testing and could one day result in a new tool to fight cancer.

A second research group led by Bradley Moore, Ph.D., from Scripps Institution of Oceanography at the University of California San Diego, independently showed that corals make related molecules. Both studies are published in the May 23 issue of Nature Chemical Biology.

A World of Possibilities

Soft corals have thousands of drug-like compounds that could work as anti-inflammatory agents, antibiotics, and more. But getting enough of these compounds has been a major barrier to developing them into drugs for clinical use. Schmidt says that these other compounds should also now be accessible using this new approach.

Corals aren’t the only animals that harbor potential therapeutics. Nature is crawling with snakes, spiders and other animals known to carry chemicals with healing properties. Yet that compounds from soft corals offer distinct advantages for drug development, Schmidt says.

Unlike venomous chemicals that are injected into prey, corals use their chemicals to ward off predators that try to eat them. Since they are made to be eaten, the soft coral chemicals are easily digestible. Similarly, drugs derived from these types of compounds should be able to be given as pills with a glass of water, rather than taken by injection or other more invasive means. “These compounds are harder to find but they’re easier to make in the lab and easier to take as medicine,” says Schmidt.

These possibilities had been just out of reach for decades. Getting to this point took the right know-how, and a little luck.

Hunting for the Source

Scesa found the long-sought-after compound in a common species of soft coral living off the Florida coast—just a mile from his brother’s apartment. In the 1990s, marine scientists reported that a rare coral near Australia carried a chemical, eleutherobin, with anti-cancer properties. The chemical disrupts the cytoskeleton, a key scaffold in cells, and soft corals use it as a defense against predators. But laboratory studies showed that the compound was also a potent inhibitor of cancer cell growth.

In the decades after, scientists searched but could not find the fabled “holy grail” chemical in the quantities needed for drug development and couldn’t remedy the problem without understanding how the chemical was made. Dogma had it that, similar to other kinds of marine life, the chemical was synthesized by symbiotic organisms that lived inside the animals.

“It didn’t make sense,” Scesa says. “We knew that corals must make eleutherobin.” After all, he and Schmidt reasoned, some soft coral species don’t have symbiotic organisms and yet their bodies contain the same class of chemicals.

Solving the mystery seemed a job made for Scesa. As a boy growing up in Florida, the ocean was his playground, and he spent countless hours exploring its depths and wildlife. In graduate school, he developed a penchant for organic chemistry and combined the two interests to better understand the chemical diversity of the seas.

Later, he joined the lab of natural products scientist Schmidt with a mission to track down the source of the drug lead. Scesa suspected coral species familiar to him might have the answer and brought small live samples from Florida to Utah, and the real hunt began.

The next step was to find out whether the coral’s genetic code carried instructions for making the compound. Advances in DNA technology had recently made it possible to rapidly piece together the code of any species. The difficulty was, the scientists didn’t know what the instructions for making the chemical should look like. Imagine searching a cookbook for a certain recipe, only you don’t know what any of the words inside the book mean.

“It’s like going into the dark and looking for an answer where you don’t know the question,” remarks Schmidt.

They addressed the problem by finding regions of coral DNA that resembled genetic instructions for similar types of compounds from other species. After programming bacteria grown in the lab to follow coral DNA instructions specific to the soft coral, the microorganisms were able to replicate the first steps of making the potential cancer therapeutic.

This proved that soft corals are the source of eleutherobin. It also demonstrated that it should be possible to manufacture the compound in the lab. Their work is now focusing on filling in the missing steps of the compound’s recipe and determining the best way to produce large amounts of the potential drug.

“My hope is to one day hand these to a doctor,” says Scesa. “I think of it as going from the bottom of the ocean to bench to bedside.” 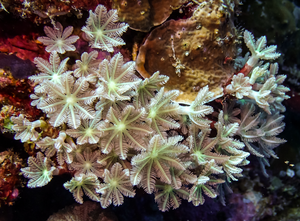 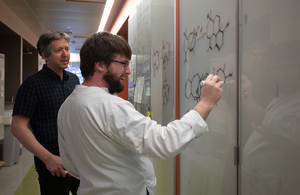 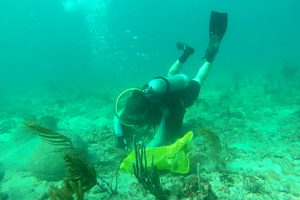 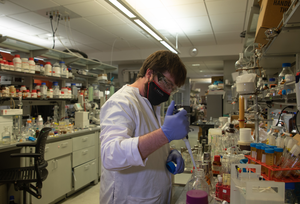