A national policy change to facilitate the broader sharing of donor livers through “acuity circles” has resulted in procurement delays, according to a researcher at the University of Miami Miller School of Medicine.

“By expanding the geographic area for sharing donor livers, acuity circles increased the number of ‘local’ centers for transplant recipients, expanded travel arrangements, and added complexity for organ procurement organizations that coordinate the process,” said David Goldberg, M.D., associate professor of medicine in the Division of Digestive Health and Liver Diseases. “While the resulting delays averaged just a few hours, in some cases the policy change added one or two days to the procurement process.”

On February 4, 2020, the United Network for Organ Sharing (UNOS), a non-profit serving as the nation’s transplant system, implemented a change in liver and intestine distribution based on “acuity circles,” expanding the geographic area to transplant hospitals within 150, 250, or 500 nautical miles of the donor hospital. The policy was designed to reduce pre-transplant deaths, increase pediatric transplantation, and reduce geographic variation in medical urgency scores at the time of transplant, according to UNOS.

“Under this policy, a donor liver at a New York City hospital would be offered to transplant centers from Baltimore to Boston, rather than just to nearby locations,” said Dr. Goldberg. “As a result, more centers need to respond to the procurement option, leading to procurement delays that can be emotionally taxing for family members waiting for the organ to be removed. It can also add to the hospital’s operating costs since the donor’s bed in the intensive care unit is occupied for a longer period.”

Dr. Goldberg noted that the procurement process becomes more complex when a donation includes a kidney or intestines as well as the liver. “Different teams may remove the various organs, which might then be transported to different locations,” he said. “It’s not surprising that delays were longer with multi-organ donations.”

Dr. Goldberg said the team’s analysis indicated that the initial COVID-19 surges were not responsible for the pre-procurement delays, especially since testing quickly became routine on admission.

For the study, the Miller School researchers used Organ Procurement and Transplantation Network data on donation after brain death donors between April 7, 2019, and June 30, 2020. That included 6,230 liver donors in the pre-acuity circles period and 10,749 after the new policy was implemented. The median pre-procurement time increased from 47.6 hours to 50.3 hours with acuity circles.

“Although the average increase in pre-procurement time was two to four hours, there were outliers with increases of 48 hours or longer in most regions,” said Dr. Goldberg. “Future studies are needed to better understand the impact of pre-procurement delays on families, ICU strains, and financial consequences for donor hospitals.” 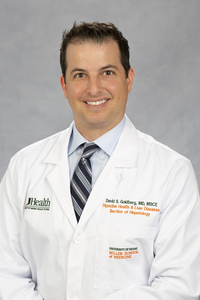