Besides planting milkweed in the garden, people interested in helping monarch butterflies might want to turn off the porch light.

Biologists at the University of Cincinnati say nighttime light pollution can interfere with the remarkable navigational abilities of monarchs, which travel as far as Canada to Mexico and back during their multigenerational migration.

Researchers found that butterflies roosting at night near artificial illumination such as a porch or streetlight can become disoriented the next day because the light interferes with their circadian rhythms. Artificial light can impede the molecular processes responsible for the butterfly’s remarkable navigational ability and trigger the butterfly to take wing when it should be resting.

“We found that even with a single work light that you find at a construction site, monarch butterflies treat that like it’s the sun,” UC assistant professor Patrick Guerra said.

The study was published in the journal iScience.

With their erratic, circuitous movements taking them to and fro across your garden, it might be hard to imagine monarch butterflies sticking to a rigid flight plan. But their migrations take some monarch populations thousands of miles to the same forests in Mexico where they spend the winter.

“It's an important question given that many migrants fly through urban areas,” co-author and UC master’s graduate Samuel Stratton said. “Getting some ecological data would be really helpful to seeing what impacts light pollution can have on orientation and migratory outcomes.”

Monarchs rely on the darkness of night to process proteins key to their internal compass. These help the insects tell which direction to fly to reach their southern wintering grounds and return.

“The animal keeps track of day and night from this molecular system of production and degradation of proteins,” Guerra said.

Light pollution can disrupt normal circadian rhythms and sleep-wake cycles of wildlife and people alike. City lights have been shown to disrupt the navigation of animals like baby sea turtles, which mistake them for the glow of the moon on the ocean and head away from the water when they hatch.

Researchers have examined the effects of light pollution on birds and other animals that migrate at night.

“We wanted to focus on animals that migrate during the day,” Guerra said.

Millions of monarch butterflies living east of the Rocky Mountains leave their summer breeding grounds in southern Canada and the northern United States, traveling as much as 2,500 miles (or 4,000 kilometers) to overwintering sites in Mexico.

Monarchs can take up to five generations during this cross-continent trek and back. Along the way, they use an internal clock that tells them where to orient themselves in relation to the changing position of the sun in the sky.

But monarchs exposed to nighttime light pollution, like a street lamp above their chosen roost in a cedar tree, can experience a phase shift, making their body think it’s either earlier or later than it really is. That can throw off their sense of time, UC researchers found.

“It’s like jet lag,” Guerra said. “Essentially, their sense of time is disturbed.”

UC researchers demonstrated this effect by conducting controlled laboratory studies. They simulated and isolated the effects of light trespass perturbation on migratory animals normally active in the day.

“We found that you’re messing with their day-night cycle. Light pollution can make them think that the day is longer or that the day starts sooner,” he said.

So if you want to be hospitable to monarchs, Guerra said, maybe don’t keep the light on for them.

“It’s something to think about if you’re making a pollinator garden or if you want to be eco-friendly,” Guerra said. 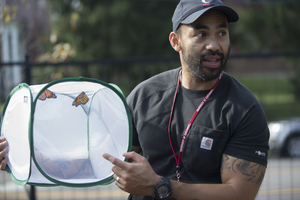 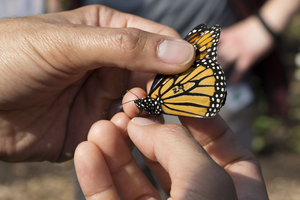 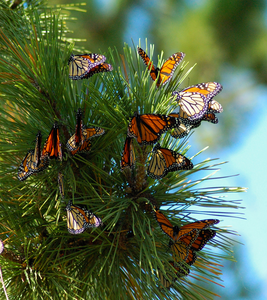