What did Stephen Hawking and Mao Zedong have in common? They both suffered from Amyotrophic Lateral Sclerosis (ALS), a cure for which remains elusive. Scientists from Osaka Metropolitan University took an important step toward prevention of ALS and another brain disorder called Frontotemporal dementia (FTD) with their research on the effects of the antibiotic rifampicin on genetically modified mice.

“The primary cause of FTD and ALS is a hexanucleotide repeat expansion (HRE) in non-coding regions of the C9orf72 gene,” said lead researcher Professor Takami Tomiyama. This mutation causes neurodegeneration through loss-of-function or gain-of-toxic-function mutations. “The loss-of-function mutation is indicated by the formation of a nucleic acid structure called G-quadruplex that blocks the transcription of C9orf72. The gain-of-toxic-function mutation is indicated by the formation of RNA foci, the aggregates of toxic RNAs, and of dipeptide repeat proteins (DPRs),” Professor Tomiyama explained. Together, G-quadruplex and DPRs further accelerate the aggregation of RNA-binding proteins such as TDP-43, leading to neurodegeneration.

Rifampicin is an antibiotic that slows bacterial RNA production; it is usually administered in conjunction with other antibiotics. By examining the influence of rifampicin on the formation of RNA foci, DPRs, and TDP-43 inclusions, the research team determined its potential for preventing FTD and ALS. They nasally administered rifampicin to mice with the human C9orf72 gene containing a 500 hexanucleotide repeat expansion. The team then evaluated the mice’s cognitive function through observing their ability to escape a maze, before examining their brain tissue.

The findings show that intranasal rifampicin treatment significantly improved the mice’s cognitive function and memory. It substantially inhibits the formation of cytoplasmic inclusions composed of protein aggregates in brain tissue. Rifampicin also weakens the formation of RNA foci containing G-quadruplex, although it is unclear how. Furthermore, synapse loss, neuronal loss, and microglial activation are also attenuated by rifampicin treatment.

This study is the latest in a series of the researchers’ articles on the impact of rifampicin in neurological disorder prevention. "We have previously shown in model mice that nasal administration of rifampicin is effective against dementia such as Alzheimer's disease, tau-related FTD, and dementia with Lewy bodies,” concluded Professor Tomiyama. “However, this time, it was found that it is also effective against the onset and progression of FTD and ALS, caused by the C9orf72 gene. Rifampicin may be a widely effective drug for forestalling neurodegenerative diseases.”

About OMU
Osaka Metropolitan University is a new public university formed by a merger between Osaka City University and Osaka Prefecture University in April 2022. For more science news, see https://www.upc-osaka.ac.jp/new-univ/en-research/, and follow @OsakaMetUniv_en, and search #OMUScience. 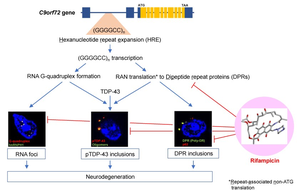