A research team of ETRI reveal the 8K-UHD media service technology which meets the North American broadcasting standards to the whole world. By introducing domestic technology in the fields of next-generation ultra-high-resolution TV broadcasting and communication, the team is expected to lead the global 8K-UHD market.

The Electronics and telecommunications research institute (ETRI) announced that it would participate in the “National Association of Broadcasters (NAB) 2022” of the world's largest size, which will be held at the Las Vegas Convention Center in the US for four days from the 24th, and introduce the latest 8K-UHD broadcasting and 5G convergence media broadcasting technologies.

The 8K-UHD is a screen composed of more than 33 million pixels. Because its resolution is 4 times higher than 4K and, detailed expression in video is possible, it is considered the leading ultra-high-resolution technology. Moreover, as the transition to the 8K media era is getting faster, the necessity of developing broadcasting and media technologies to provide seamless 8K-UHD service is also increasing.

The technologies by ETRI have revealed in this exhibition, along with Korean broadcasting equipment companies, are based on ATSC1) 3.0.

MIMO is a technology of doubling the transmission capacity of existing channels by applying two antennas vertically and horizontally to the transmitter and receiver, respectively, without adding a frequency resource.

As it is an innovative technology to enable a large volume transmission of 8K media by effectively utilizing the existing frequency without being allocated with additional frequency, the world is paying attention to it. It is fully compatible with the ATSC 3.0 standards, and it resolved the problems of signal interference due to combining antennas.

The technology introduced by ETRI in this exhibition is a pure Korean technology developed through long-term joint research with broadcasting equipment companies such as KBS, CleverLogic, Kai Media, AGOS, and LowaSIS.

Also, Seung-chan Bang, Director of Communication and Media Research Center of ETRI, mentioned, "We will make full use of this NAB 2022 as the chance of publicizing the excellence of Korea's 8K-UHD broadcasting technology and 5G convergence media service technology as well as leading the Korean companies' global expansion.”

In the future, the ETRI research team plans to secure the technical basis to watch ultra-high-definition 8K broadcasting by enhancing the source technology. Also, the team plans to continue additional R&D for commercialization and standardization as the 8K market expands.

ETRI’s broadcasting technology won the “Technology Innovation Award” for the contribution to the development of a transmission technology of mobile HD and 4K-UHD services at the ‘NAB Show 2015’ in 2015. On top of this award, this technology has won the best journal thesis award by IEEE Broadcast Technology Association, numerous best conference thesis awards, etc.

3) OTA(Over The Air)/OTT(Over The Top) : VOD such as Netflix and Tving, and public TV broadcasting which provides real-time broadcasting service

Funder
Ministry of Science and ICT 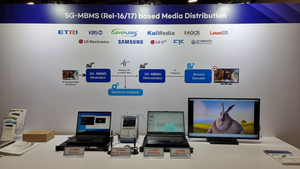