cells are compartmentalized by membranes, and proteins present in these membranes play a very important role in transporting various cellular information. For proper function of these proteins to occur, a tertiary protein structure must be formed through the correct folding process. In Yoon’s study, the folding process of a glucose transporter – a complex membrane protein – was identified for the first time using single-molecule magnetic tweezers. In particular, using the endoplasmic reticulum (ER) membrane protein complex (EMC) and a lipid molecule with a specific structure, the folding pathway of a glucose transporter was fully elucidated in a physiological environment. Finally it was discovered through bioinformatics that the membrane protein’s structure-forming ability and its capacity to transport glucose had to have struck a balance throughout its evolutionary history.

Glucose transporter proteins, as the name suggests, are a group of proteins that possess a pathway through which glucose can pass. Glucose transport pathways are functionally essential, but on the other hand, these pathways act as obstacles in forming the tertiary structures of membrane proteins. Cells have various helpers to solve these difficulties. In this study, it was found that the EMC – a type of protein chaperone – as well as uniquely-structured lipid molecules work in conjunction in helping the glucose transporter in its structure formation.

Specifically, it was confirmed that the domain corresponding to half of the glucose transporter proteins located in the N-terminus contained more stable structure formations compared to the proteins from the subsequent C-terminus domain (Figure 2). Using bioinformatics, this characteristic of glucose transporter proteins was found to be conserved in all metazoan sugar transporter proteins (Figure 3). Through these observations, it can be concluded that the cell had to strike a balance in its structure by sacrificing some of its structure-forming ability in order to obtain more functionally superior membrane proteins by developing highly functional chaperones or uniquely-structured lipid molecules.

This figure is a schematic diagram showcasing the folding process of a glucose transporter using magnetic tweezers. A high force is applied first to unwind the protein completely. The applied force is then lowered which allows the folding process to be observed. In the picture, a portion of the glucose transporter can be seen being folded to form a structure and enter the bicelle (colored blue). This folding process does not often occur without external assistance, so this process is accomplished with the help of the surrounding membrane environment and protein complexes such as the EMC.

The figure on the left shows the application of force to the glucose transporter using magnetic tweezers. Bicelles composed of various lipid molecules were supplied to provide an environment required for membrane proteins to function. In addition, EMCs were added to help form the correct tertiary protein structure. When the magnetic bead is pulled toward the permanent magnet, tension is applied to the DNA string connected to the protein, and a constant force is applied to the protein itself. Through this experiment, the folding pathway of the glucose transporter was revealed as shown on the right side of the figure. In the fully unfolded state of individual helix proteins, the N-domain close to the N-terminus is first folded to obtain the protein’s structure-forming ability. Then, with the help of the EMC and a uniquely-shaped lipid molecule, the C-domain folds and finally the two domains combine to form a functional tertiary protein structure.

Bioinformatics was used to analyze the sequence of GLUT3 as well as other evolutionarily-related sugar transport proteins. A total of 143 proteins were analyzed and presented as a phylogenetic tree as shown in the figure on the left. The sequence of the sugar transport protein of metazoans including Homo sapiens was analyzed closely as shown on the right. By combining this data with the information observed on the folding pathway obtained through magnetic tweezers, it was revealed that the structure-forming ability of membrane proteins and their capacity to transport sugars effectively both developed through an evolutionary balance.

Evolutionary balance between foldability and functionality of a glucose transporter

Figure 2. Schematic diagram of magnetic tweezers and the folding pathway of a glucose transporter 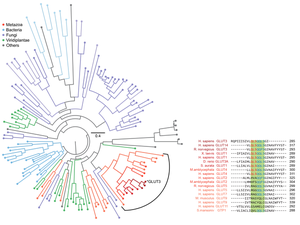