Researchers in Delft have succeeded in teleporting quantum information across a rudimentary network. This first of its kind is an important step towards a future quantum Internet. This breakthrough was made possible by a greatly improved quantum memory and enhanced quality of the quantum links between the three nodes of the network. The researchers, working at QuTech—a collaboration between Delft University of Technology and the Netherlands Organisation for Applied Scientific Research (TNO)—are publishing their findings today in the scientific journal Nature.

The power of a future quantum Internet is based on the ability to send quantum information (quantum bits) between the nodes of the network. This will enable all kinds of applications such as securely sharing confidential information, linking several quantum computers together to increase their computing capability, and the use of highly precise, linked quantum sensors.

The nodes of such a quantum network consist of small quantum processors. Sending quantum information between these processors is no easy feat. One possibility is to send quantum bits using light particles but, due to the inevitable losses in glass fibre cables, in particular over long distances, the light particles will very likely not reach their destination. As it is fundamentally impossible to simply copy quantum bits, the loss of a light particle means that the quantum information is irrecoverably lost.

Good control over the system

In order to be able to teleport quantum bits, several ingredients are required: a quantum entangled link between the sender and receiver, a reliable method for reading out quantum processors, and the capacity to temporarily store quantum bits. Previous research at QuTech demonstrated that it is possible to teleport quantum bits between two adjacent nodes. The researchers at QuTech have now shown for the first time that they can meet the package of requirements and have demonstrated teleportation between non–adjacent nodes, in other words over a network. They teleported quantum bits from node “Charlie” to node “Alice”, with the help of an intermediate node “Bob”.

The second step is creating the “message” — the quantum bit — to be teleported. This can, for example, be '1' or '0' or various other intermediate quantum values. Charlie prepares this quantum information. To show that the teleportation works generically, the researchers repeated the entire experiment for various quantum bit values.

Step three is the actual teleportation from Charlie to Alice. For that purpose, Charlie carries out a joint measurement with the message on his quantum processor and on his half of the entangled state (Alice has the other half). What then happens is something that is possible only in the quantum world: as a result of this measurement, the information disappears on Charlie’s side and immediately appears on Alice’s side.

You might think that everything is then completed, but nothing could be further from the truth. In fact, the quantum bit has been encrypted upon transfer; the key is determined by Charlie’s measurement result. So Charlie sends the measurement result to Alice, after which Alice carries out the relevant quantum operation for decrypting the quantum bit. For example via a “bit flip”: 0 becomes 1 and 1 becomes 0. After Alice has carried out the correct operation, the quantum information is suitable for further use. The teleportation has succeeded!

Financial support comes from the EU Flagship on Quantum Technologies through the project Quantum Internet Alliance (EU Horizon 2020, grant agreement no. 820445); from the European Research Council (ERC) through an ERC Consolidator Grant (grant agreement no. 772627 to R. Hanson); from the Netherlands Organisation for Scientific Research (NWO) through a VICI grant (project no. 680-47-624) and the Zwaartekracht program Quantum Software Consortium (project no. 024.003.037/3368) and from an Erwin-Schrödinger fellowship (QuantNet, no. J 4229- N27) of the Austrian National Science Foundation (FWF).

Qubit teleportation between non-neighboring nodes in a quantum network 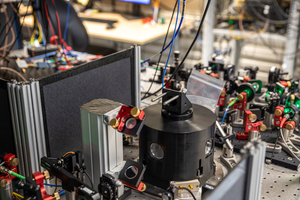 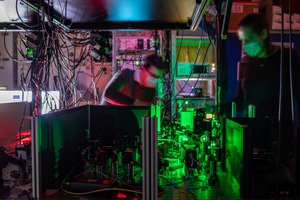 Researchers work in the lab