This award recognises the Herbarium's natural history collections as being of great historical and scientific importance for the country.

Established in 1761 it holds an estimated 1.1 million plant specimens from all over the world, making it one of the largest collections of pressed and dried plant specimens in the UK. An estimated 50,000 of these are ‘type’ specimens – the specimens selected as the original reference to define a species of plant.

The collection includes almost 1,000 specimens collected by Charles Darwin on the Voyage of the HMS Beagle – perhaps the most famous scientific expedition in history. Darwin’s specimens, along with others in the collection including those of Darwin’s mentor, John Stevens Henslow, were key to the development of the theory of evolution by natural selection.

Other specimens were collected by three centuries’ worth of influential naturalists including Alfred Russel Wallace, Joseph Banks, and Hans Sloane. Some were sent back from famous expeditions including the HMS Challenger Expedition (1872-6), and the Ross Antarctic Expedition of HMS Erebus and Terror (1839-43).

She added: “We are extremely pleased that the Herbarium has been awarded Designated status, and that this major biodiversity archive is now recognised officially, alongside the other extraordinary collections held by the University of Cambridge.”

Arts Council England’s Designation Scheme recognises the pre-eminent collections of national importance held in England’s non-national museums, libraries and archives, based on their quality and significance. Cambridge University Herbarium’s award demonstrates that its holdings are some of the finest and most significant in the country, and recognises that the University of Cambridge is committed to the continued safeguarding and use of this remarkable collection for the benefit of generations to come.

Dr Nick Merriman, Chair, Designation Panel, said: “The Designation Scheme plays a critical role in raising the profile of nationally and internationally significant collections throughout England. We hope this spotlight safeguards them for the enjoyment and enrichment of many generations to come.

“I’m delighted that the scheme has recognised the outstanding nature of the Cambridge University Herbarium collection. It demonstrates the breadth of collections that exist in our institutions, and the role they can play in addressing the past, present and future of the planet.”

Part of the Department of Plant Sciences, the Cambridge University Herbarium is held in climate-controlled facilities located in the University Botanic Garden. Specimens can currently be viewed at specific exhibitions, public talks and online activities held by the Herbarium.  A new website and specimen portal will be launched later this year that will make high resolution images of the specimens freely accessible online. Digitisation of the specimens has started, which will enable much greater use of the collection.

The more than 3300 herbaria around the world are crucial resources in addressing several of our greatest global challenges - including the unfolding mass extinction of plants and animals, food security, and climate change. They are at the core of efforts to identify and name plant species, conserve biodiversity, preserve indigenous plant knowledge, and improve the economic status of local communities around the world. 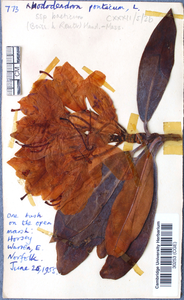 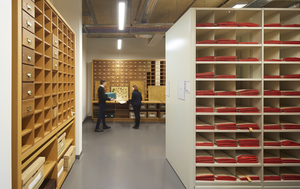