Fossils of a strange early giraffoid have revealed the key driving forces in giraffe evolution, according to a study led by researchers from the Institute of Vertebrate Paleontology and Paleoanthropology (IVPP) of the Chinese Academy of Sciences.

The study was published in Science on June 2.

How the giraffe's long neck evolved has long been an evolutionary mystery. Although there have been different opinions about the process of giraffe neck elongation, scientists never doubted that the impetus for neck elongation was high foliage.

However, as observation of giraffe behavior increased, scientists began to realize that the elegant, long neck of giraffes actually serves as a weapon in male courtship competition and this may be the key to the giraffe evolutionary mystery.

Specifically, giraffes use their two-to-three-meter-long swinging necks to hurl their heavy skulls—equipped with small ossicones and osteomas—against the weak parts of competitors. As a result, the longer the neck, the greater the damage to the opponent.

IVPP researchers and their collaborators conducted their study on Discokeryx xiezhi, a strange early giraffoid. This research contributes to understanding how the giraffe's long neck evolved as well as to understanding the extensive integration of courtship struggles and feeding pressure. In fact, the neck size of male giraffes is directly related to social hierarchy, and courtship competition is the driving force behind the evolution of long necks.

The fossils in this study were found in early Miocene strata from about 17 million years ago on the northern margin of the Junggar Basin, Xinjiang. A full skull and four cervical vertebrae were part of the find.

"Discokeryx xiezhi featured many unique characteristics among mammals, including the development of a disc-like large ossicone in the middle of its head," said Prof. DENG Tao from IVPP, a corresponding author of the study. DENG said the single ossicone resembles that of the xiezhi, a one-horned creature from ancient Chinese mythology—thus giving the fossil its name.

"Both living giraffes and Discokeryx xiezhi belong to the Giraffoidea, a superfamily. Although their skull and neck morphologies differ greatly, both are associated with male courtship struggles and both have evolved in an extreme direction," said WANG Shiqi, first author of the study.

The research team compared the horn morphology of several groups of ruminants, including giraffoids, cattle, sheep, deer and pronghorns. They found that horn diversity in giraffes is much greater than in other groups, with a tendency toward extreme differences in morphology, thus indicating that courtship struggles are more intense and diverse in giraffes than in other ruminants.

The research team further analyzed the ecological environment of Discokeryx xiezhi and the niche it occupied. The Earth was in a warm period and generally densely forested, but the Xinjiang region, where Discokeryx xiezhi lived, was somewhat drier than other areas because the Tibetan Plateau to the south had been rising dramatically, thus blocking the transfer of water vapor.

"Stable isotopes of tooth enamel have indicated that Discokeryx xiezhi was living in open grasslands and may have migrated seasonally," said MENG Jin, another corresponding author of the study. For animals of the time, the grassland environment was more barren and less comfortable than the forest environment. The violent fighting behavior of Discokeryx xiezhi may have been related to survival-related stress caused by the environment.

At the beginning of the emergence of the genus Giraffa, a similar environment existed. Around seven million years ago, the East African Plateau also changed from a forested environment to open grassland, and the direct ancestors of giraffes had to adapt to new changes. It is possible that, among giraffe ancestors during this period, mating males developed a way of attacking their competitors by swinging their necks and heads. This extreme struggle, supported by sexual selection, thus led to the rapid elongation of the giraffe's neck over a period of two million years to become the extant genus, Giraffa. 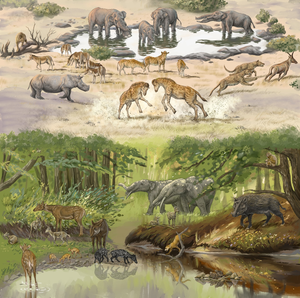