In January of 2020, SARS-CoV-19 reached the United States. With it came an even faster-spreading virus—xenophobic rhetoric referring to the pandemic’s epicenter in Wuhan, China. Politicians flooded news outlets and social media with distrust of the Chinese government and labeled COVID-19 as the “Chinese flu,” “Wuhan flu,” “Kung flu” and more.

The messaging that blamed COVID-19 on its Asian country of origin appeared to spill over into the streets. Americans who are Asian, Asian American and Pacific Islander (AAPI) began to experience racist harassment, discrimination and physical assault at higher rates than before the pandemic. According to the Stop AAPI Hate Initiative, an online tool for self-reported hate incidents against AAPI individuals, there were 9,000 hate incidents during the first year of COVID-19. In our online age, it’s crucial to understand whether racist trends on social media cause harm in the real world. If so, how can we best predict where racists attacks are most likely to occur?

A new University of Utah-led study has taken a first step in a paper that published in the American Journal in Publish Health in April. The researchers mapped anti-Asian hate by using Twitter’s data set of geolocated tweets that contained keywords reflecting COVID-19 and anti-Asian hate during November 2019 and May 2020.

They found that anti-Asian hate language surged between January and March of 2020 with clusters of hateful tweets spread across the contiguous U.S. that varied in size, strength distribution and location. The authors identified two spikes in hateful tweets: The first at the end of January 2020 when COVID-19 first came to the U.S.; the second in mid-March after President Donald Trump tweeted about the “Wuhan flu” and “Chinese virus.” Eventually the volume of anti-Asian tweets went down but remained higher than before the pandemic.

“We can interpret that as, once the hate is up, then the hate persists. At least as long as our study period,” said Alexander Hohl, assistant professor at the University of Utah and lead author of the study. “During the onset of COVID, there were reports of hate crimes committed on Asians and Asian Americans in the U.S. We think that warrants a research perspective.”

This study is the first to put anti-Asian hate tweets on a map. The authors hope this method will one day help guide officials to allocate resources towards responding to pandemic-based racism as a public health threat.

“In American culture, we perceive Asians to be the model minority, right? They tend to do well academically and make money, or at least that's our perception,” said Richard Medina, associate professor at the U and co-author of the study. “Oftentimes Asians in America are overlooked as targets of hate speech or hate crimes. But COVID-19 brought that out.”

The authors purchased 4,234,694 geolocated tweets from Twitter. From this dataset, they searched for tweets that fit the following criteria: written in English, sent within the study period, located in the contiguous U.S. and included COVID-19 language (coronavirus, SARSCoV2 etc.). Then they classified the remaining 3,274,614 tweets into hateful or non-hateful based on the presence of additional keywords related to anti-Asian hate (kungflu, Wuhanvirus, etc.) and put them on the map.

They identified 15 clusters as the geographic regions where the number of anti-Asian hate tweets were statistically higher than expected, based on the underlying population. The authors also calculated the so-called relative risk for every U.S. county, which describes the ratio of hateful tweets sent inside a county versus outside. The darker the color of the counties, the higher this relative risk.

The authors found low hate from November 2019 to January 2020 (0%-.1% of daily tweets were hateful). Then the surge began, culminating in the first of two spikes in the study period.

The strongest cluster was in Ross County, Ohio, where the proportion of hateful tweets was about 300 times higher than the rest of the country. There were no identifiable patterns for anti-Asian hate along urban and rural or geographic gradients; they were scattered across the country and varied widely in size, population, location and number of tweets. The authors plan to do further analysis that may reveal demographic and socioeconomic factors to explain cluster locations.

Racism is a public health crisis

The study is in the early stages of what the authors hope can become a public health tool for protecting marginalized communities from racist hate crimes. Their next steps are to improve their method for classifying hateful tweets, and by exploring other algorithms for creating clusters.

They also want to understand whether hateful tweets mean that violence against the group will break out. They plan to map the time and place where hate crimes have occurred against AAPI, although hate crime data is notoriously unreliable due to inconsistent reporting by states to federal databases.

“It’s difficult to track hate because the FBI’s hate crime database contains such a small sample of incidents compared to what actually happens, especially because some forms of verbal harassment are not illegal. But there is an increase in this and it's not just because we're paying more attention,” said Medina. “We’re seeing more Asian immigrants throughout the country, and we’re seeing more hate towards them as an immigrant population in general. It’s just going to continue, and we need to pay attention to that.”

The authors also want to develop a description a hateful place. They plan to look at the socioeconomic and demographic variables in counties or cities with elevated levels of anti-Asian hate.

“The hope is that we can use hate in social media as a predictor of hate on the streets to use as an alarm for communities and public health official to get the help and protection that they need.”

Other authors on the study include Moongi Choi, Neng Wan and Ming Wen at the University of Utah, and Aggie Yellowhorse at Arizona State University.

Spatial Distribution of Hateful Tweets Against Asians and Asian Americans During the COVID-19 Pandemic, November 2019 to May 2020 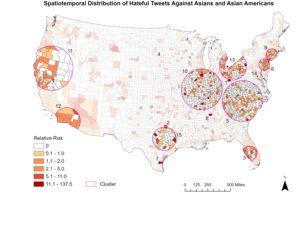 Hateful tweets against Asians and Asian Americans in the U.S.