In between Earth's rigid tectonic plates above and its convecting mantle below is a hot and soft layer known as the asthenosphere. At mid-ocean ridges, upwelling of the hot asthenosphere to the surface of the seafloor forms new ocean crust.

With time, the ocean crust becomes older, colder, and denser, and is finally recycled back down into the mantle at subduction zones. Because of this, the oceanic crust is typically less than 200 million years old.

A joint research team led by Prof. LIU Chuanzhou from the Institute of Geology and Geophysics (IGG) of Chinese Academy of Sciences, found abyssal peridotites dredged from the seafloor along the Southwest Indian Ridge that are the oldest rocks from the ocean ever discovered. Further study revealed that they were derived from the neighboring African continent.

This work was published in Science Advances on June 1.

These newly discovered rocks from the Indian Ocean are as old as 2.7 billion years and date back to a time period geologists call the "Archean", which comes from the Greek word for "ancient". As an analogy, the occurrence of these ancient rocks at a young ocean ridge is like finding one's mother in one's child's kindergarten class. Fortunately, these oddly ancient mid-ocean ridge rocks offer a clue in regard to their mysterious origins.

Moreover, these ancient rocks have strongly refractory compositions; in geochemistry, refractory denotes a lack of fusible (i.e., easily melted) components in the mantle. Therefore, they are less like oceanic materials, and more closely resemble rocks from the continents. The only possible explanation for this is that these Archean mantle rocks from the Indian Ocean had been dislodged and transported through the asthenosphere over 2,000 km to the mid-ocean ridge where they were discovered.

To test if this hypothesized recycling mechanism could actually do the trick, computer simulations were conducted. The modeling results suggest that the recycling process was highly efficient. As much as 20% of the continent could be removed within as little as 100 million years—from a geological perspective, the blink of an eye.

Old continental roots popping up on the ocean floor clearly indicates that the ocean plates are more complicated than previously thought. Therefore, to decipher Earth's evolution, more attention should be paid to the ocean floor, which covers three-fifths of the Earth's surface.

The study was performed in collaboration with the Woods Hole Oceanographic Institution and Max-Planck Institüt fur Chemie.

The work was supported by the National Science Fund for Distinguished Young Scholars, Strategic Priority Research Program of the Chinese Academy of Sciences, and the National Key Research and Development Project of China. 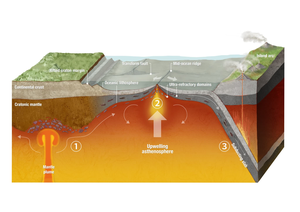