Turns out you’re not the only one who needs a good night's rest to function well the next day.

Researchers with the University of Cincinnati found that mosquitoes whose slumber is disrupted are more interested in catching up on their sleep than looking for food the next day. The research demonstrates how vital this biological function is even among insects.

“It was a bit surprising. Sleep deprived or not, a blood meal should appeal to them,” UC doctoral student and study lead author Oluwaseun Ajayi said.

The study was published online on May 3 and in print on June 1 in the Journal of Experimental Biology.

The phenomenon of catching up on missed sleep, called sleep rebound, has been observed in other animals such as honeybees, fruit flies and people.

Biologists in UC’s College of Arts and Sciences and Virginia Tech’s Department of Biochemistry spent more than a year developing protocols to study mosquito sleep. While observations can affect the outcome of virtually any experiment — a phenomenon called the observer effect — UC biologist Joshua Benoit said this was especially true when studying mosquito sleep.

Mosquitoes are able to sense people through their body heat, odors, movement, vibrations and the carbon dioxide they exhale from their lungs and emit from their skin.

“It’s really hard to quantify sleep in mosquitoes when, as soon as you walk in the room, you’re considered their Thanksgiving dinner,” Benoit said.

Mosquitoes in the lab sleep a lot — between 16 and 19 hours a day depending on the species and the stimulation around them.

Recognizing a sleeping mosquito takes some skill. When they’re not looking for food, mosquitoes perch for long periods of time to conserve energy. But researchers discovered a subtle telltale sign the mosquitoes were asleep.

“When mosquitoes enter a sleep-like state, their hind legs droop and their body comes closer to the surface,” Ajayi said.

The experiment examined three species of mosquitoes, each responsible for transmitting disease to people: Aedes aegypti, a “day biter,” Culex pipiens, which seeks a meal at dusk; and Anopheles stephensi, which is most active at night.

Researchers studied the mosquitoes’ sleep and feeding behavior for about a week after they were acclimatized to their new experimental habitat. In a second experiment, researchers subjected them to sleep deprivation during their normal bedtime by vibrating their enclosures at regular intervals during the day or night.

While more than 75% of mosquitoes that were not subjected to sleep deprivation sought a blood meal, less than one-quarter of them had any interest in food after a sleepless night. This represented a 54% decrease in the propensity to feed among sleep-deprived mosquitoes.

“What’s surprising to me is that as much as mosquitoes need blood to produce eggs, they will give it up to recover the sleep they lost,” Benoit said. “They might not be aroused as much because of the need to catch up on sleep.”

The overtired mosquitoes also were less likely to land on a host in both laboratory and field settings, suggesting that the same behaviors would occur in natural settings like your back yard.

Lucas Gleitz participated in the research project as a UC undergraduate biology student. After graduation this year, he plans to attend medical school.

The study’s findings were relatable given the sleepless nights most college students endure.

“As a college student, we joke that we eat sleep for dinner,” Gleitz said.

Sleep is tied to immune and restorative functions such as tissue repair and protein synthesis, Gleitz said. Research has also demonstrated how important sleep is to memory and brain function.

“We learned that sleep is a very crucial aspect of living organisms. Those internal clocks keep running, even for mosquitoes,” he said.

Mosquitoes cause more human suffering than any other animal, according to the World Health Organization. Malaria alone kills more than 400,000 people annually. And mosquitoes carry pathogens for other deadly diseases such as dengue and yellow fever.

“It’s important to understand their sleep dynamics — when they feed and when they sleep,” Benoit said.

No conflicts to report.

Tired mosquitoes would rather catch up on sleep than bite you 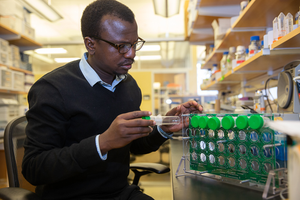 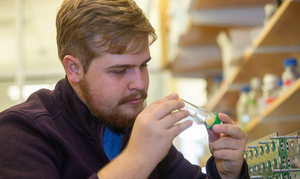 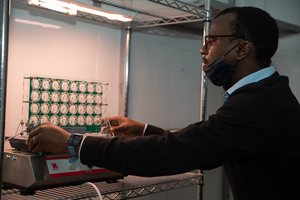 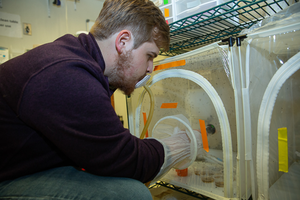