Prior to the first world war, sprawling European empires collectively controlled roughly 80% of Earth’s landmass. Following WWII, that percentage drastically shrank, as colonies and occupied territories successfully vied for their independence, leading many to assume that the colonial mindset of taking from smaller countries to support large nations had been relegated to the past.

But a new study by an international collaboration of researchers shows how the legacy of colonialism is still deeply entrenched within scientific practice across the Caribbean archipelago. Rather than solely critiquing these practices, however, the authors hope the study serves as a map to help researchers avoid the pitfalls of extractive science.

“We wanted to provide a solutions-based approach,” said lead author Ryan Mohammed, a Trinidadian biologist and postdoctoral research associate at Massachusetts’ Williams College. “We want to encourage foreign scientists to incorporate local people and knowledge into their research and try to provide avenues for local scientists to springboard their scientific careers.”

The authors outline systemic issues related to perceptions and scientific practice in the Caribbean. They then describe positive steps being taken in two countries — Trinidad and Tobago and The Bahamas — that follow a clear path toward a more equitable exchange of resources and benefits from research.

Islands have played an essential role in the origin and development of ecology and evolutionary biology and are often viewed as natural laboratories, where complex patterns like migration and diversification can be teased apart.

“When trying to understand these processes, you go to islands because they’re isolated, they seem controllable and there are many of them, allowing you to repeat experiments or make comparisons,” said senior author Alexis Mychajliw, an assistant professor at Vermont’s Middlebury College.

The Caribbean islands are a biodiversity hotspot that have attracted naturalists for centuries. But, Mychajliw explains, they also have a long history of human habitation: They’ve been the home of Indigenous communities for thousands of years, and they were the first European colonies in the Americas, calling into question whether current patterns were caused by “natural” processes.

“Viewing these spaces as natural laboratories also implies that people haven’t had a role in shaping them in the past,” she said.

The idea that Indigenous communities in the Americas made no lasting alterations to their environments, known as the “Pristine Myth,” has been debunked on multiple occasions but is often still the default notion in environmental and ecological studies. Even when properly accounted for, deciphering the signature left by more than 5,000 years of human habitation in the Caribbean can be challenging.

“When Europeans ‘discovered’ the Caribbean islands, what they saw and recorded wasn’t necessarily the natural state of the region’s biodiversity,” said senior author Michelle LeFebvre, assistant curator of South Florida archaeology and ethnography at the Florida Museum of Natural History. “For example, Indigenous people moved animals up from South America and in between islands, resulting in a biocultural diversity. If we really want to understand the natural history of an area, archaeologists, paleontologists and biologists all need to work together.”

Caribbean researchers attempting to piece together the natural history of the archipelago’s more than 7,000 islands run up against multiple obstacles. One of the most formidable of these is a lack of access to specimens. To illustrate this issue, the authors conducted a global analysis of digitized natural history collections from Trinidad and Tobago, which showed that the vast majority are housed in North American and European Institutions.

The same pattern holds true for other islands in the Caribbean as well.

“Many Bahamian collections are in museums throughout the world, which requires local scientists to travel outside their country to incorporate those specimens into their research,” said co-author Kelly Fowler, a Bahamian anthropologist with the National Museum of The Bahamas.

Nor is this problem restricted to specimens. Guppies are model organisms on which scientists conduct detailed studies to uncover patterns shared by a variety of species. Although guppies can now be found just about anywhere on Earth, they’re native to parts of South America and Trinidad and Tobago. Since at least the 1940s, guppies have been extensively studied in Trinidad, and more than 1,000 papers have been published on guppy research.

“They’ve been used to study everything from ecology and evolution to pathology and the vector spread of disease,” Mohammed said. “But none of this research actually gets back to Trinidad, and Trinidadians often don’t even know about the work that’s been done on these fish.”

Mohammed was the first Trinidadian to co-author a paper on guppies in 2001 and was later the first lead author on a guppy study in 2012. He’s conducted most of this work in the United States, as this is currently the only way to feasibly access data.

Fossils find their way back to Trinidad and Tobago

The exportation of natural-history specimens directly curtails local research and education, but it also has more subtle and pernicious effects that influence everything from cultural identity to conservation.

Mohammed referenced a fossil from an extinct group of giant armadillos found in Tobago. Researchers have known that Trinidad was once connected to current-day Venezuela based on similar fossils found in both countries, but the bone plate from Tobago is the sole piece of evidence that indicates all three were likely once a continuous landmass, he said.

“If we didn’t know of this fossil’s existence, we wouldn’t know about that connection. The problem is, that fossil doesn’t reside in Trinidad and Tobago; it’s currently elsewhere.”

Such fossil specimens in the tropics tend to be rare compared with temperate environments, as the warm and moist conditions near the equator result in the rapid decomposition of plant and animal remains. Trinidad is a spectacular exception to this rule. The island's southern spur is home to the largest tar pits on the planet, which entomb a plethora of fossils in sticky, viscous asphalt deposits. Giant ground sloths, armadillos, relatives of modern elephants called gomphotheres, and rodents were all pulled from the surrounding area in the early 20th century when foreign oil companies began pumping out asphalt for export.

Of the 68 known mammal fossils excavated from the pits, the majority are located outside of Trinidad, and nearly all of the preserved plants, birds and insects referenced in early manuscripts from the time seem to have disappeared entirely.

An international collaboration of researchers from multiple institutions is now spearheading an effort to return these fossils to Trinidad.

“For local scientists to train the next generation, they need to have collections where they are,” LeFebvre said.

Advancing science through equitable partnerships in The Bahamas

Other institutions are working with local and foreign researchers to ensure that any specimen leaving its country of origin in the Caribbean only does so as a temporary loan. In the study, the authors reference the longstanding partnership between the Antiquities Monuments & Museums Corp. (AMMC) in The Bahamas and the Florida Museum.

The Bahamas is another example of a tropical region with an exceptional fossil and archaeological record. The natural history of Great Abaco Island is recorded not in seeps and tar pits but in cavernous sinkholes. For over three decades, local and international collaborators worked to build what became the country’s largest natural history collection on Abaco while sharing resources, distributing their findings and developing public exhibits and educational material.

The strength of these collaborative efforts was tested in 2019, when the category 5 Hurricane Dorian made landfall and stalled over The Bahamas, decimating the museum facilities along with much of Abaco and Grand Bahama. All of the associated specimens might have been lost, had not the long history of trust and collaboration between AMMC and the Florida Museum enabled researchers to mount a speedy rescue effort to retrieve and rehabilitate the collections.

Kelly Fowler sees the potential for such outreach and curation efforts on other islands in The Bahamas going forward. “I’m hoping that I can assist the AMMC in reestablishing a similar program for New Providence to fill that knowledge gap and inspire future professionals,” she said.

All the issues addressed in the study come down to the nature and strength of scientific collaborations, says LeFebvre.

“There needs to be a level of personal relationship and trust-building, slowing down to hear what the local scientists and community stakeholders want and what they’re interested in gaining from any given collaboration,” she said.

LeFebvre contends that an exchange of ideas among people from multiple backgrounds and disciplines is needed for an accurate understanding of past ecosystems, which, in turn, is a necessary requisite for protecting modern environments. And while inclusivity should be the status quo in all scientific practice, it’s paramount in regions like the Caribbean that are still reeling from the effects of colonialism.

“It can be tempting to think that science is an apolitical endeavor,” she said. “This was the assumption throughout colonial history, and it's still an undercurrent in scientific practice. But museum collections and natural-history specimens are not apolitical or neutral. We need to continue finding ways to conduct science in a more socially and culturally responsible way.”

The authors published their study in The American Naturalist.

Funding for the study was provided in part by the National Science Foundation and the National Socio-Environmental Synthesis Center.

Melissa Kemp of the University of Austin at Texas is also a senior author on the paper. Grace Turner, of the Antiquities Monuments & Museums Corp., Michael Pateman and Maria A. Nieves-Colón of the University of Minnesota, Lanya Fanovitch of the Environmental Research Institute Charlottesville, Siobhan Cooke of the Johns Hopkins University School of Medicine, Liliana Dávalos, of Stony Brook University, Scott Fitzpatrick of the University of Oregon, Christina Giovas of Simon Fraser University, and Myles Stokowski and Ashley Wrean of Middlebury College are co-authors.

The persistent effects of colonialism in Caribbean science 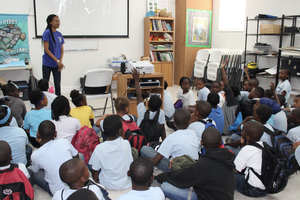 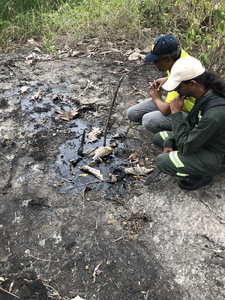