Bound states in the continuum (BICs) are a special class of resonant states. Although they have the same momentum and energy as the propagating modes in free space, yet they are not coupled to the latter and thus have infinite lifetimes. This unique property has attracted great research interest. BICs have application prospects in many fields, including lasers, sensors, filters, and many others. However, so far there has been no efficient algorithm for BICs, and in previous studies, researchers’ focus is usually on BICs in the region with a single radiation channel, but there are scarce studies on BICs in the high-frequency region with multiple radiation channels.

Recently, the research group of Professor Dezhuan Han of Chongqing University and the research group of Professor Jian Zi of Fudan University, using the physical mechanism of total internal reflection of Bloch waves, develop a BIC algorithm for the photonic crystal slab. When the total internal reflection of multiple Bloch waves occurs at the interface of the photonic crystal slab, the phase shift of each Bloch wave is used to establish a database in the wave vector-frequency space. By considering the guidance condition, the BICs can be quickly and accurately located.

Compared with other algorithms, this algorithm has the following two distinct advantages: (1) It can search for BICs with very high precision in a large parameter space (for example, when the phase shift database is established, it only takes ~10ms second to find all BICs for a specific value of the slab thickness), greatly reducing BIC search time. (2) It can identify BICs in the high-frequency region with multiple radiation channels, expanding the application range of BICs. When there are many (≥3) radiation channels in free space, it can also quickly optimize the quality factor of quasi-BICs .

Those researchers obtain the analytical formula for total internal reflection of Bloch waves under the condition of weak contrast limit, and thus obtain the limit behavior of BICs. For multi-channel BICs, their unique topological properties are revealed – they originate from the accidental coincidence of topological charges in different radiation channels in the momentum space. It is worth mentioning that for conventional BICs below the diffraction limit, splitting an integer topological charge into two half-integer charges requires breaking the spatial symmetry of the structure; however, for multi-channel BICs beyond the diffraction limit, even without the spatial symmetry broken, this split can still occur.

The BIC algorithm developed in this work is released on the Github website (https://github.com/PMRG-LE707/bicks) for use in the design and application of photonic crystal slabs by researchers in need.

See the paper for details： 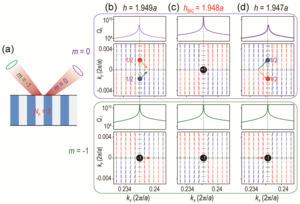