To what extent has Earth's gravity shaped our cognitive and brain functions? Utilizing spaceflight and a ground-based analog, a new study shows that the human brain relies on bodily gravitational signals transmitted from the vestibular cortex to sustain its selective sensitivity to visual biological motion (BM).

Led by Dr. JIANG Yi from the Institute of Psychology of the Chinese Academy of Sciences (CAS) and Dr. CHEN Shanguang from the China Astronaut Research and Training Center, a collaborative research team has investigated how microgravity and simulated microgravity exposure alters visual BM perception and has examined the underlying neural processes.

On Earth, the movement of biological entities, including our own species, is constrained by gravity. Humans are endowed with extraordinary abilities to detect and perceive gravity-compatible visual BM stimuli but are less sensitive to their inverted counterparts. Such orientation-dependent perceptual sensitivity allows us to react selectively to life motion signals in the environment, which may confer an evolutionary advantage. However, the origin of such selective perceptual sensitivity remains to be determined.

Based on findings from a space experiment, two ground-based control experiments, and a spaceflight analog experiment, the researchers found that the orientation-dependent sensitivity in BM perception relies on neural computation of gravity cues from the visual and vestibular modalities.

In the space experiment, after about a week of exposure to microgravity in space, the astronauts consistently exhibited reduced inversion effects in BM perception. Such changes arose from microgravity exposure rather than non-gravity-related factors (e.g., test environment and practice effect), as revealed by two ground-based control experiments.

"Living in the particular gravity environment -one gram- of the Earth is essential to sustaining our orientation-dependent sensitivity to life motion signals," said Dr. WANG Ying, first author of the study.

This study provides fresh insight into how human brains use gravity cues as an embodied constraint to facilitate life motion perception in different gravity environments, paving the way for further exploration of the adaptive plasticity of the human perceptual system in space.

This work has been published in Nature Communications and was funded by the Ministry of Science and Technology of China, the National Natural Science Foundation of China, and CAS. 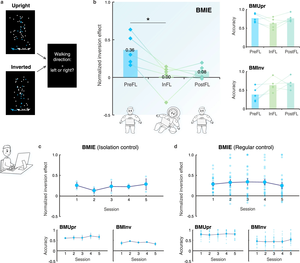