Fusarium graminearum is a widespread pathogenic fungus that causes Fusarium head blight (FHB) in cereal crops worldwide, especially in wheat. Between 2000 and 2018, more than 4.5 million hectares were annually affected by FHB in China, or around 20% of the total planted wheat acreage. This has resulted in annual production losses of more than 3.41 million tons.

Researchers led by Prof. BAI Yang from the Institute of Genetics and Developmental Biology (IGDB) of the Chinese Academy of Sciences in collaboration with Profs. CHEN Yun and YU Yunlong of Zhejiang University have recently found that F. graminearum perithecia provided a specific ecological niche for bacteria that could play an important role in disease establishment.

Over 2,000 bacterial strains were isolated from the native microbiota of F. graminearum and subsequently identified and screened for antagonistic activity. The researchers successfully recovered 113 isolates that showed antagonistic activity against the pathogen. One specific bacterial isolate, ZJU23, was identified as Pantoea agglomerans and had the strongest inhibitory ability against F. graminearum. Subsequently, they found that herbicolin A secreted by ZJU23 was responsible for the observed suppression of F. graminearum.

By comparing the metabolic profiles of ZJU23 and four deletion mutants of a potential biosynthetic gene cluster, they found that herbicolin A was synthesized by the AcbA-AcbJ cluster. They then proceeded to uncover the mode of action of herbicolin A against various fungi.

It is important to note that the modes of action of cyclic lipopeptides against fungi are mostly unknown. It’s surprising that herbicolin A was shown to disrupt lipid rafts by interacting with ergosterol, which resulted in the formation of abnormal cell membranes and ultimately caused cell death.

In addition, herbicolin A was found to inhibit the growth of Candida albicans and Aspergillus fumigatus, and it was more effective than the clinical fungicides Amphotericin B and fluconazole. This provided important evidence for potential applications of herbicolin A beyond agriculture, for example in medicine.

Overall, the researchers have deciphered the mechanism of the inhibitory effect of herbicolin A on fungi and identified its biosynthetic gene cluster. This discovery will support future progress in the sustainable management of Fusarium head blight worldwide. 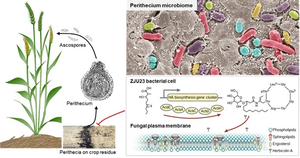 Proposed model for the mode of action of herbicolin A secreted by ZJU23 in the fungal perithecium microbiome.