“We can now optimise the design of these energy storage tanks against large earthquakes, improving their safety and security and mitigating against the significant environmental and economic consequences of failure.”

At present in Australia there are around ten major LNG production facilities addressing local demand, with nearly 100 million tonnes of LNG exported overseas per year.

LNG is usually contained within a vertical circular steel container made of high ductility materials such as 9% nickel steel, while a second container often made of reinforced concrete is needed for external protection and vapor tightness or confinement.

Associate Professor Fatahi said the most common locations for LNG tanks are coastal regions, which often have poor ground conditions, requiring deep pile foundations. Thus, construction of LNG plants can cost billions of dollars and there is a great demand to minimise the construction costs while ensuring safety and security.

“Our model can increase reliability of LNG tank design to avoid catastrophic failures similar to the damage to the LNG tanks in Japan after the magnitude 7.5 Niigata earthquake, which resulted in uncontrolled fires and explosions with severe pollution of the environment,” he said.

“We have developed an analysis and design method encompassing the LNG, inner and outer tanks, foundations and the interaction among them, using a single computer model capable of modelling the entire tank system in one step.

“Moreover, our findings, recently published in the Bulletin of Earthquake Engineering and Journal of Performance of Constructed Facilities, showed the optimisation of LNG tank design can result in reduced construction costs of these mega projects.

“This will provide an opportunity to build more of these large energy storage facilities, contributing to better global energy security and a growing economy.

“War in the Ukraine, recent flooding on the east coast impacting mining works and supply for power stations, seasonal low levels of renewable energy production and plant outages have all been contributing to the current energy supply challenge and sharp price rises in Australia.

“Building more LNG storage facilities can allow Australia to store more energy at the right time and use it at the time of high demand without impacting our international export commitments.

“These storage facilities may also be used in future for storage of other types of energy such as hydrogen or ammonia as a hydrogen carrier,” Associate Professor Fatahi said.

The research team is now looking at the use of polymeric materials for seismic protection of large storage tanks for these emerging energy resources.

A model of improved safety for LNG storage 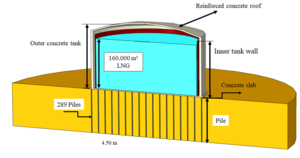