A Kobe University research group has shed light on how low-frequency tectonic tremors occur; these findings will contribute towards better predictions of future megathrust earthquakes.

In addition to the subducting Pacific plate, the Alaska subduction zone is also characterized by a subducting oceanic plateau called the Yakutat terrane. Low-frequency tectonic tremors, which are a type of slow earthquake, have only been detected in the subducted Yakutat terrane area. However, the mechanism by which these events occur is not well understood.

Researchers at Kobe University performed a 3D numerical thermomechanical simulation of thermal convection in the Alaska subduction zone with the aim of revealing the mechanism behind these low-frequency tremors. Based on the 3D thermal structure obtained from the simulation, and the indications of hydrous minerals contained in the slab, the researchers calculated the water content distribution and compared the results of these calculations in the area where the tremors occur.

The results revealed high levels of dehydration in the marine sediment layers and ocean crust in the earthquake region. The researchers believe that the reason the tremors only occur in the Yakutat terrane is because the marine sediment layers and ocean crust are thicker there, which means that the level of dehydration is higher than in the western adjacent Pacific plate (where tectonic tremors don’t occur).

Research Methodology
The researchers performed a 3D numerical thermomechanical simulation in accordance with the subduction of the Yakutat terrane and Pacific plate in the Alaska subduction zone. It is thought that as the Pacific plate subducts, it brings the hydrous minerals in the slab into the deep high temperature and high pressure regions, and these conditions cause a dehydration reaction where water is expelled from the hydrous minerals. Based on the 3D thermal structure obtained from the numerical simulation, the researchers determined dehydration levels of the hydrous minerals in the slab. From these results, it was understood that in the region where low- frequency tremors occur, a large amount of water is expelled due to the high temperature and high pressure conditions that cause the dehydration degradation reactions. It is thought that low frequency earthquakes don’t occur in the Pacific plate because it has thin layers and therefore experiences little dehydration. On the other hand, the Yakutat terrane’s ocean crust and marine sediment layers are comparatively thicker, meaning that it experiences high levels of dehydration. The researchers concluded that this is why low-frequency tectonic tremors only occur in the Yakutat terrane.

Glossary
1. Low-frequency tectonic tremors: A seismic event that is characterized by lower-frequency seismic waves than a regular earthquake.
2. Slow earthquake: A phenomenon where a fault slips at a slower speed than in a regular earthquake.
3. Oceanic plateau: A comparatively flat area of the seabed.
4. Slab: refers to the subducted plate.
5. Hydrous mineral: Minerals that contain OH groups in their crystal structure.
6. Dehydration degradation reaction: As the plate subducts, the resulting temperature and pressure causes phase transformations of hydrous minerals and they expel water.

Acknowledgements
Part of this study was supported by KAKENHI grants (16H06477, 21H05203) from the Japanese Ministry of Education, Culture, Sports, Science and Technology (MEXT).

The link between temperature, dehydration and tectonic tremors in Alaska 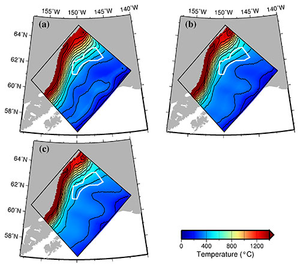 Figure 2: Temperature distribution in the slab 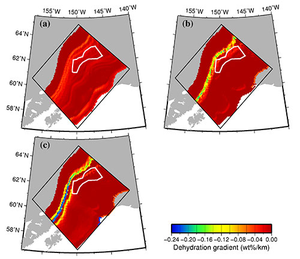 Figure 3: The distribution of the slab’s dehydration gradient 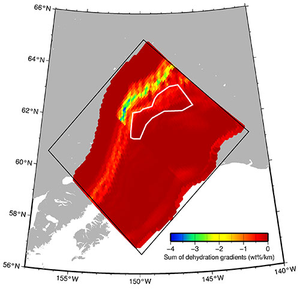 Figure 4: The total sum of the dehydration gradient from the marine sediment layers and ocean crust