Texas A&M University researcher Dr. Hongquan Chen is spearheading a two-year project to upgrade the software with pathline calculation visualizations, which can show how changing conditions underground affect the speed and direction of fluids.

Since no cameras exist underground to show detailed reservoir activity, tracking injected fluid movement is a matter of math based on data and the laws of physics to render or visually create flow simulations. Streamline software is fast enough to render an instant flow field, like a snapshot. Still, it can’t keep up with flow alterations, especially when reservoir pressures drop or increase with startups or shutdowns in adjacent wells. Pathline calculations consider fluid to be made of individual particles, and all instances of each fluid particle’s movements are traced and combined into a tracking flow, like a video.

“Think of buildings on the Texas A&M campus as the geologic structure underground and the students moving between them as the individual fluid particles,” Chen explained. “Streamlines would be the timed snapshots from security cameras that track students leaving or entering the buildings. Pathlines would be tracking every student’s phone by GPS location as they traveled their entire routes to class. So, streamlines assume a steady walk between buildings, and pathlines show if they ran, walked or stopped to talk.”

Chen graduated with a doctoral degree from Texas A&M, and his research topic involved advanced streamline tracing techniques, geologic model calibration and rate optimization. In fact, he developed the currently used streamline software as part of his doctoral project, so providing the upgrade seemed logical.

Upgrading the software means Chen is enhancing the software architecture to accommodate a robust parallel calculation process while developing algorithms to trace the fluid particle positions, or pathline segments, across time steps. In the end, all the pathline segments will be chain-linked into a flow-over-time video, like a computer-animated movie. Because the particle locations are captured frame by frame, any flow field changes that disturb the particles’ movement will show up in the video.

The upgrade is a huge undertaking. Thankfully, Chen made a hobby of learning computer science and parallel computing during his graduate school years, noting that these tools are extremely useful in engineering solutions to problems. He is putting that education to good use while designing the software architecture and algorithms to be efficient and practical enough for field application. However, the software must handle models with billions of cells within minutes and show a video of movement in almost real time to be helpful on site.

According to Chen, several aspects of the project are ready — the high-performance computing strategy, the functional module hierarchy and the data structures to be used as critical designs in the software. The project is progressing smoothly, but Chen did mention caveats.

The project currently focuses on fluid flow in conventional oil and gas reservoirs, but Chen said pathlines could also reflect fluid migration in more complicated reservoirs. The calculations could also work with gas injections, easily tracking and displaying whether carbon dioxide or hydrogen penetrates deeply into a storage reservoir or migrates to a place of high leakage risk.

“We could even extend this to geothermal problems,” said Chen. “Like fluids, thermal energy can also be traced, though heat flow is more intangible. This could visualize any subsurface flow, whether fluid or heat. The potential is there.” 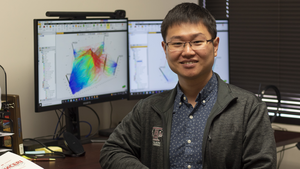