Two decades in the making, a new flagship facility for nuclear physics opened on May 2, and scientists from the Department of Energy’s Oak Ridge National Laboratory have a hand in 10 of its first 34 experiments. ORNL researchers and their partners at other national laboratories and universities launched the first experiment on May 11.

The Facility for Rare Isotope Beams, or FRIB, a DOE Office of Science user facility at Michigan State University, will produce more than 1,000 new rare isotopes. These are not your parents’ isotopes, such as the americium-241 in smoke detectors or the fluorine-18 in PET scanners.

FRIB’s rare isotopes have abnormal proton-to-neutron ratios, so they are unstable and prone to decay. Many exist for mere fractions of a second, such as magnesium-40, calcium-55 and nickel-78. Until now, they were made only in stellar explosions and neutron star mergers. Now, what is designed to be the world’s most powerful heavy-ion accelerator makes them here on Earth.

“FRIB will launch a new era of discovery,” said Witold Nazarewicz, FRIB’s chief scientist and a distinguished professor of physics at MSU. “ORNL has provided long-term expertise and unique instrumentation that will help FRIB deliver new knowledge about what holds atomic nuclei together, how elements are created and how to use nuclei for societal benefits.”

FRIB’s first experiment is led by Heather Crawford of DOE’s Lawrence Berkeley National Laboratory with partners at ORNL, the University of Tennessee, Knoxville, and elsewhere. The experiment employs the FRIB Decay Station initiator, or FDSi, a modular, multidetector system that is extremely sensitive to rare isotope decay signatures.

“The FDSi is an assembly of the best detectors available in the scientific community within an integrated infrastructure for FRIB nuclear decay studies,” said ORNL’s Mitch Allmond, who manages the project. A key component of the FDSi originated from seminal work on germanium detector design by ORNL’s David Radford, including the CLover Array for Radioactive ION Beams, or CLARION.

FDSi allows scientists to quickly mix and couple detectors to capture different types of nuclear data. “All of these individual detectors existed in different groups until now,” Allmond added.

FDSi is now at FRIB and is coupled to the Versatile Array of Neutron Detectors at Low Energy, or VANDLE, a neutron spectroscopy instrument developed under Robert Grzywacz, a UTK physics professor with a joint appointment at ORNL. VANDLE provides energy information about neutrons. FDSi’s CLARION-VANDLE instrument duo is the first stop on FRIB’s beam line.

Its last stop is the Modular Total Absorption Spectrometer, or MTAS, a one-ton gamma-ray detector. “It is FRIB’s big catcher’s mitt,” Grzywacz said. As the beam lands in MTAS, the detector efficiently measures all its energy as one lump sum. MTAS was developed for beta-decay studies of neutron-rich and proton-rich nuclei under ORNL’s Krzysztof Rykaczewski. The instrument is installed at FRIB for experiments planned for June to probe the decay of calcium-55, an important isotope in astrophysics.

Other ORNL instruments and resources available to FRIB’s international user community of nearly 1,600 researchers include:

Inside the accelerator, the ions pick up speed. When they reach half the speed of light, they smash against the target, which breaks the nuclei into pieces, each having fewer protons and neutrons than nuclei in the original stable beam. An array of superconducting electromagnets purifies the resulting beams of radioactive isotopes at FRIB. “You basically create a cocktail of many residual products,” Allmond said.

Some rare isotopes are pulled out for applications. Others continue through a series of magnets that filter out undesirable isotopes. Electromagnetic “switchyards” steer purified beams to end stations that maintain them for experiments.

Scientists can accelerate, stop and reaccelerate the beams for experiments at a wide range of desired energies.

Many FRIB experiments grew out of pioneering work in ORNL’s Physics Division to create beams of radioactive ions.

On March 18, 1962, the first light-ion beam circulated in the Oak Ridge Isochronous Cyclotron. In the 1970s, the addition of a tandem accelerator enabled heavy-ion beams. By 1997, a novel reconfiguration allowed for the first-ever radioactive ion beams. Renamed the Holifield Radioactive Ion Beam Facility, or HRIBF, it became a resource for nuclear physicists worldwide. Nazarewicz, FRIB’s chief scientist, served as HRIBF’s scientific director from 1999 to 2012.

“HRIBF was a key component of the worldwide program with rare isotopes and played a crucial role in the pathway to FRIB. It was the only U.S. facility providing the capability of accelerated beams of short-lived nuclei,” Nazarewicz said.

“We did things there which were simply impossible anywhere else,” Grzywacz said. Those feats included the first measurement with a reaccelerated unstable beam in North America and the first acceleration of neutron-rich fission fragments of tin-132 to confirm its doubly magic nature, which gives a nucleus extraordinary stability.

HRIBF users had access to high-quality beams of 200 rare isotopes. They made seminal measurements with instrument arrays. Moving detector readouts to electronic systems, they pioneered digitization for nuclear physics.

In 2012, HRIBF was decommissioned but the instrumentation was still available for use. The researchers have since upgraded instruments for installation at other facilities, such as Japan’s RIKEN, Argonne National Laboratory’s ATLAS and FRIB.

In 2016, the American Physical Society declared HRIBF a historic physics site. Its DNA lives on in FRIB.

ORNL’s Chipps, chair of the FRIB User Organization, also spoke at FRIB’s opening. “FRIB will position us to gain incredible new insights into the nature of the universe around us,” she said.

The DOE Office of Science supported the ORNL research.

UT-Battelle manages ORNL for the DOE Office of Science, the single largest supporter of basic research in the physical sciences in the United States. The Office of Science is working to address some of the most pressing challenges of our time. For more information, please visit energy.gov/science.

Cryomodules comprise FRIB’s linear accelerator, propelling heavy ions to half the speed of light into a target to make more than 1,000 new isotopes once found only in space. Credit: Facility for Rare Isotope Beams

ORNL scientists including Mitch Allmond (left, with CLARION) and Robert Grzywacz (with VANDLE), work on 10 of the first 34 experiments at the Facility for Rare Isotope Beams. Credit: Robert Grzywacz/ORNL, U.S. Dept. of Energy

Work at the Holifield Radioactive Ion Beam Facility by physicists like David Radford, shown adjusting a gamma-ray detector in 1998, lives on in the Facility for Rare Isotope Beams. Credit: Curtis Boles/ORNL, U.S. Dept. of Energy 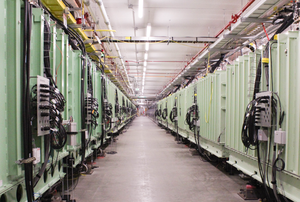 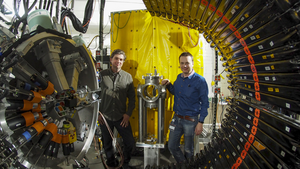 Mitch Allmond with CLARION and Robert Grzywacz with VANDLE 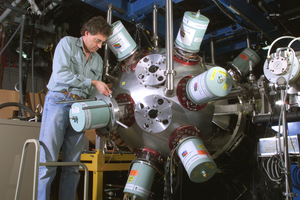 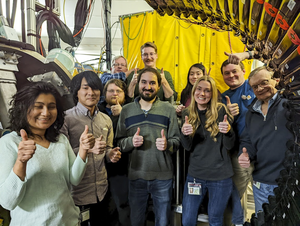