When our sun exhausts the hydrogen fuel in its core some 5 billion years from now, it will expand to become a red giant, engulfing the inner planets. The dynamics and possible outcomes of planetary engulfment are poorly understood, but it is thought to be a relatively common fate for planetary systems.

A new study using hydrodynamical simulations reveals the forces acting on a planet when it is swallowed by an expanding star. The results show that the interactions of a substellar body (a planet or brown dwarf) with the hot gas in the outer envelope of a sun-like star can lead to a range of outcomes depending on the size of the engulfed object and the stage of the star’s evolution.

Lead author Ricardo Yarza at the University of California, Santa Cruz, will present the new findings on June 13, 2022, at the 240th meeting of the American Astronomical Society (AAS) in Pasadena.

“Evolved stars can be hundreds or even thousands of times larger than their planets, and this disparity of scales makes it difficult to perform simulations that accurately model the physical processes occurring at each scale,” said Yarza, a graduate student in astronomy and astrophysics at UCSC. “Instead, we simulate a small section of the star centered on the planet to understand the flow around the planet and measure the drag forces acting on it.”

The results may help explain recent observations of planets and brown dwarfs closely orbiting stellar remnants such as white dwarfs and subdwarfs. Previous studies have suggested that these systems may be the end result of a planetary engulfment process that involves shrinking of the engulfed body’s orbit and ejection of the outer layers of the star.

“As the planet travels inside the star, drag forces transfer energy from the planet to the star, and the stellar envelope can become unbound if the transferred energy exceeds its binding energy,” Yarza explained.

According to the calculations by Yarza and his colleagues, no substellar bodies smaller than about 100 times the mass of Jupiter can eject the envelope of a sun-like star before it has expanded to about 10 times the radius of the sun. At later stages of stellar evolution and expansion, however, the stellar envelope could be ejected by an object as small as ten times the mass of Jupiter, which would shrink its orbit by several orders of magnitude in the process.

The study also found that planetary engulfment can increase the luminosity of a sun-like star by several orders of magnitude for up to several thousand years, depending on the mass of the engulfed object and the evolutionary stage of the star.

A great variety of planetary systems have now been described by exoplanet search programs. As these systems evolve, a significant fraction are likely to undergo planetary engulfment. “We believe it is relatively common,” Yarza said.

A paper on the new findings has been submitted for publication in the Astrophysical Journal and is available online at arxiv.org/abs/2203.11227. The senior authors of the paper are Enrico Ramirez-Ruiz, professor of astronomy and astrophysics, and Dongwook Lee, associate professor of applied mathematics, both at UC Santa Cruz.

Ramirez-Ruiz said he was impressed by Yarza’s work on this project. “There are many ingredients for success at the highest levels of astrophysics research, including creativity, palate in the selection of key questions, strength and range of knowledge, ability to communicate scientific results, technical mastery, and independence. Ricardo stands out in that his vector is large in all of these fundamental dimensions,” he said. 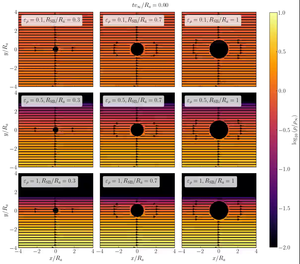