The much-loved red panda is renowned for its tree-climbing ability and adorable nature, but new research shows the endangered mammal is being driven closer to extinction.

University of Queensland PhD candidate Damber Bista, who tracked red pandas in Nepal over a 12-month period from Queensland using GPS telemetry, has found that human impact is causing the mammal to restrict its movements which is further fragmenting their habitat.

“Our research findings show that current patterns of habitat fragmentation and forest exploitation, from infrastructure projects such as new roads, are placing the red panda under increased threat,” Mr Bista said.

“Because of this, red pandas are changing their activity to minimise their interactions with disturbances, such as humans, dogs, or livestock, and this is drastically interfering with natural interactions between the animals, resulting in population isolation.”

Mr Bista has been studying red pandas for several years and in late 2019 he travelled to Nepal, where he tagged red pandas with collars which allow him to track their movements by satellite.

He returned to Australia in January 2020, with the intention of returning to Nepal within a few months to continue monitoring the animals and install cameras in the field, but COVID-19 hit.

“The satellite tracking allowed me to monitor the red pandas remotely here in Brisbane, while I relied on my friends and colleagues in Nepal to install cameras and conduct the field surveys,” he said.

“It was a surreal experience, I would spend many hours a day during COVID lockdowns in my home, watching the movement of red pandas in Nepal on my computer.”

There was one red panda which he kept a close eye on.

An adult male “Chintapu”, named after the location he was found, was known for its roaming nature and in one 24 hour period the mammal travelled 5km which is unheard of for a typical red panda.

So, what was it after – fresh bamboo, or perhaps a wild blossom delicacy? “It was during breeding season,” Mr Bista explained.

Other red pandas that Mr Bista followed closely for 12-months included a female “Paaruhaang”, named after a local deity, a female “Mechaachaa” meaning daughter, and “Ninaammaa” which means Queen of the Sky in local dialect.

There was also “Brian”, named after the founder of the Red Panda Network.

Mr Bista’s research was the fifth known global study conducted on wild red pandas, and only the second in Nepal.

“With the findings from this study showing fragmentation of their habitat, together with a previous study on the impacts of poaching, I am concerned about the future of this species.

“While red pandas can adapt to habitat impacts to some extent, they may be susceptible to local extinction under these conditions, placing the wider population of the species at risk.”

Mr Bista said the dwindling amount of wild forest forces the red panda into situations where it must decide on whether to live closer to predators or adapt to co-exist with humans.

“As you’d expect, it’s in an animal’s best interest to avoid its predators, but as we continue to build more roads and infrastructure, that drastically reduces the capacity for red pandas to do this,” he said.

“As the availability of suitable forests shrink, it’s up to the red panda to weigh up its options on how to best survive.

“This trade-off can lead to an increased risk of mortality and population decline in the long run.”

He said this underpinned the need to minimise human-induced disturbances, which is one of the recommendations made in the study.

“Our recommendation is for human activities to be strictly regulated during most if not all biologically crucial times such as mating, dispersal and birthing seasons,” Mr Bista said.

“As for conservation programs, we recommend they focus on identifying ecologically sensitive areas, maintaining habitat continuity, and minimising projects that will disturb habitats, such as building roads and herding livestock.

“If road construction can’t be avoided, we suggest avoiding core areas and restrictions on speed limits and noise, and for an increase in wildlife crossings in high-risk areas.”

The research is published in Landscape Ecology. 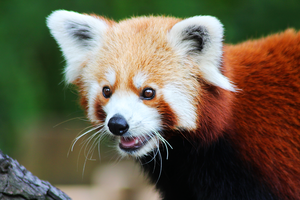