For years, scientists have warned that monarch butterflies are dying off in droves because of diminishing winter colonies. But new research from the University of Georgia shows that the summer population of monarchs has remained relatively stable over the past 25 years.

Published in Global Change Biology, the study suggests that population growth during the summer compensates for butterfly losses due to migration, winter weather and changing environmental factors.

“There’s this perception out there that monarch populations are in dire trouble, but we found that’s not at all the case,” said Andy Davis, corresponding author of the study and an assistant research scientist in UGA’s Odum School of Ecology. “It goes against what everyone thinks, but we found that they’re doing quite well. In fact, monarchs are actually one of the most widespread butterflies in North America.”

The study authors caution against becoming complacent, though, because rising global temperatures may bring new and growing threats not just to monarchs but to all insects.

“There are some once widespread butterfly species that now are in trouble,” said William Snyder, co-author of the paper and a professor in UGA’s College of Agricultural and Environmental Sciences. “So much attention is being paid to monarchs instead, and they seem to be in pretty good shape overall. It seems like a missed opportunity. We don’t want to give the idea that insect conservation isn’t important because it is. It’s just that maybe this one particular insect isn’t in nearly as much trouble as we thought.”

This study represents the largest and most comprehensive assessment of breeding monarch butterfly population to date.

The researchers compiled more than 135,000 monarch observations from the North American Butterfly Association between 1993 and 2018 to examine population patterns and possible drivers of population changes, such as precipitation and widespread use of agricultural herbicides.

The North American Butterfly Association utilizes citizen-scientists to document butterfly species and counts across North America during a two-day period every summer. Each group of observers has a defined circle to patrol that spans about 15 miles in diameter, and the observers tally all butterflies they see, including monarchs.

By carefully examining the monarch observations, the team found an overall annual increase in monarch relative abundance of 1.36% per year, suggesting that the breeding population of monarchs in North America is not declining on average. Although wintering populations in Mexico have seen documented declines in past years, the findings suggest that the butterflies’ summer breeding in North America makes up for those losses.

That marathon race to Mexico or California each fall, Davis said, may be getting more difficult for the butterflies as they face traffic, bad weather and more obstacles along the way south. So fewer butterflies are reaching the finish line.

“But when they come back north in the spring, they can really compensate for those losses,” Davis said. “A single female can lay 500 eggs, so they’re capable of rebounding tremendously, given the right resources. What that means is that the winter colony declines are almost like a red herring. They’re not really representative of the entire species’ population, and they’re kind of misleading. Even the recent increase in winter colony sizes in Mexico isn’t as important as some would like to think.”

One concern for conservationists has been the supposed national decline in milkweed, the sole food source for monarch caterpillars. But Davis believes this study suggests that breeding monarchs already have all the habitat they need in North America. If they didn’t, Davis said, the researchers would have seen that in this data.

“Everybody thinks monarch habitat is being lost left and right, and for some insect species this might be true but not for monarchs,” Davis said. If you think about it, monarch habitat is people habitat. Monarchs are really good at utilizing the landscapes we’ve created for ourselves. Backyard gardens, pastures, roadsides, ditches, old fields—all of that is monarch habitat.”

In some parts of the U.S., monarchs have a year-round or nearly year-round presence, which leads some researchers to believe the insects may in part be moving away from the annual migration to Mexico. San Francisco, for example, hosts monarchs year-round because people plant non-native tropical milkweed. And Florida is experiencing fewer freezes each year, making its climate an alternative for monarchs that would normally head across the border.

The study was funded by grants from the USDA National Institute of Food and Agriculture.

The paper was co-authored by Timothy Meehan, of the National Audubon Society; Matthew Moran, of Hendrix College; and Jeffrey Glassberg, of Rice University and the North American Butterfly Association. Michael Crossley, who worked on the study as a postdoctoral researcher in the Department of Entomology and is now at the University of Delaware, is first author of the paper.

Note to editors: Video footage of monarch butterflies is available at the following link https://www.dropbox.com/s/qrv6of01skeibi7/Monarch_B_Roll.mp4?dl=0 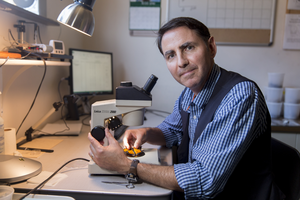